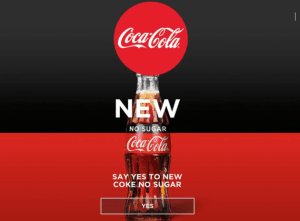 Coca-Cola has axed the Coke Zero brand. It has been replaced by a 'no-sugar' variant that Coke says tastes even more like original Coke.

The new variant was launched in Australia this week and the soft drinks giant claims it is the “best tasting no sugar Coca-Cola we’ve ever made”. It will be available on 16 June with the Zero brand gradually scrubbed out.

It retains the black colour branding, but the Zero brand will be no more. The branding on the website has the tagline “Say Yes to No Sugar”.

The decision has been made to retire the Zero brand because consumers don't understand that it contains no sugar.

Coke Zero was launched globally more than 10 years ago with multimillion-dollar marketing investment. It was dubbed 'bloke Coke' as a low sugar offering that would appeal to men, as Diet Coke was so heavily skewed towards women.

The website for the new 'no sugar' says: “The taste experts at Coca-Cola HQ in the US have been quietly blending the flavours of this exciting new recipe for more than five years.”

It appears Coca-Cola is erasing all the variant brands it has established over the last decade as part of the 'One Brand' strategy revealed 18 months ago.

When One Brand was launched, then CMO Marcos de Quinto said Coke had done consumers a disservice by treating multiple variants as separate brands rather than part of the over-arching Coca-Cola brand.

Gloablly Coca-Cola's sales and profits are on the decline. Profit fell 55% in the latest financials posted in February.

The Coca-Cola Company has rolled out Zero branded no sugar variants for most of its brands including Sprite and Fanta. It's not clear if the Zero brand will be scrubbed from these too.

Will Diet Coke be next?