Following its multimillion-dollar marketing campaign to launch Coke Life into Australia two years ago, Coca-Cola has quietly withdrawn the brand from shelves. It has replaced it with a different name and recipe.

In March 2015 the global drinks giant released 10 million packs of Coke Life in the first month alone and the launch was accompanied by a huge marketing push with a strong focus on TV and out-of-home. It was only the fourth new brand to be launched in Coke’s 128 year history.

However this week news that Coca-Cola is phasing out its Life brand in the UK due to a sales slump raised questions about its fate Down Under. During the year to 18 March 2017, in the UK Coca-Cola Life’s volume sales fell 73.1% and dropped 74.6% in value terms, according to Nielsen data seen by Marketing Week. 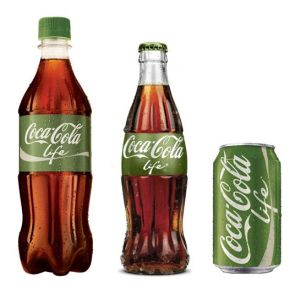 It has now also stopped selling the Life brand drink in Australia, but has replaced it with a variation with a new recipe and a new name - 'Coca-Cola with Stevia'.

A Coke spokesperson is adamant it hasn't axed Coke Life as is the case in the UK, but simply dropped the name and changed the recipe.

“Coca-Cola has recently relaunched Coke-Life in Australia as Coca-Cola with Stevia as part of our One Brand launch and we are excited about its future here,” a spokesperson said.

Coke Life, currently available in more than 30 markets, maintains consistent growth among a loyal, niche consumer base and remains a part of its One Brand Strategy for Coca-Cola Trademark, according to the company.

In February this year Coca-Cola rolled out its new 'one brand' packaging design across all its cans and bottles in Australia, almost a year to the day after announcing the biggest marketing overhaul in its history.

Speaking at an event in Sydney, Coca-Cola's James Sommerville, vice president of global design and the architect of the design, said the brand was being diluted in store and on shelf with the different designs across Coke Zero, Coke Life and Diet Coke.

Coca-Cola with Stevia is the new Coke Life