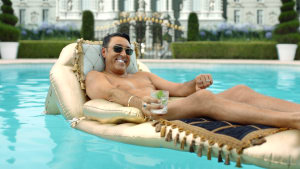 HCF has appointed BWM Dentsu as its creative agency of record, revealing the first work from the agency today.

BWM Dentsu won the insurance account following a competitive pitch that kicked off before Christmas.

The Monkeys was the agency behind its 2016 rebrand where it introduced 'Health Comes First'. AdNews understands The Monkeys hasn't worked on the HCF account since then, and it wasn't involved in the pitch.

The Monkeys chief creative officer Justin Drape tells AdNews the agency worked with HCF on a project basis, rather than being the incumbent on the account.

The move follows a restructure of its marketing team that saw the departure of CMO Jenny Williams in May last year.

A HCF spokesperson says the review is in response to the brand's "evolving needs".

"As we continue our brand transformation, we recently reviewed our creative requirements and have decided to partner with BWM. There are no other changes to our partner agencies," HCF says.

AdNews understands the CMO position will not be replaced, instead the marketing department is led by HCF chief officer of business growth, Danny Saksida, and head of advertising and campaigns Vanessa Veo.

The new 30-second spot still sits under the 2016 tagline “Health is... Not-For-Profit”, but takes a more comedic approach.

It shows a range of characters that don’t understand the concept of putting people before profits, titled ‘Profit Hungry’.

The campaign aims to communicate HCF’s not-for-profit status and the proposition that ‘your health shouldn’t be for profit’, differentiating the health fund from the other large players in the market.

The ‘Profit hungry’ creative is the first time HCF has stepped away from the ‘Health Comes First’ platform from the brand relaunch in May 2016.

Saksida says the new creative marks an important step in the evolution of the brand since the relaunch almost two years ago.

"Having consolidated our brand position as the health fund that puts your health first, it is time to make our not-for-profit status meaningful to consumers," he says.

“The ‘Profit Hungry’ campaign demonstrates how we use our profits to benefit our members. We are a unique major player in the health fund landscape. Being not-for-profit means that we don’t answer to shareholders, we answer to our members and they are our focus. We believe that your health should not be for profit.”

The Monkeys picked up the NRMA creative in 2017, which could have been considered a conflict to HCF.