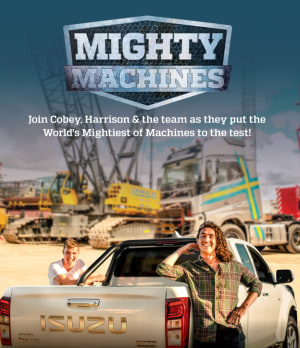 Bauer has produced a TV show, which will air on Ten, called Mighty Machines as publishers continue their diversification into other sectors.

Mighty Machines begins 1 June and runs at 4.30pm on 10 Bold in Australia and on Prime TV in New Zealand. Ten episodes have already been confirmed for the first season.

The show features reviews, adventures and profiles of the people that underpin the transport and machinery world.

Terry King, general manager publishing and executive producer at Bauer Media Group, says the show is a milestone achievement for the publisher.

The show is produced in-house by Bauer, using a team of its journalists and videographers.

“This is a really exciting project for us because it highlights our skillset across many different platforms, from magazines, digital, social, and now to television,” King says.

“It’s the only show of its type in Australia and New Zealand it covers some of the nation’s largest employment sectors."

The TV content it produces will be replicated across Bauer’s print and digital platforms.

Earlier this year Bauer’s The Australian Women’s Weekly invested in a film, as publishing giants expand into other sectors to find new revenue opportunities as print ad revenue declines.