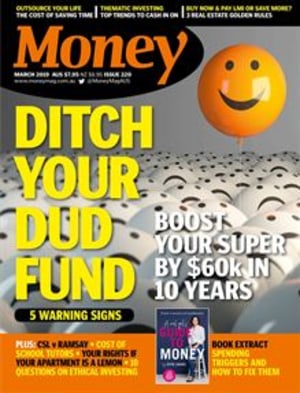 Bauer has sold Money magazine to Rainmaker, making it yet another title to leave the Bauer family in recent times.

In an announcement today, CEO ANZ Paul Dykzeul says Bauer decided to sell the magazine as it is focused on deepening its category specialisation and focusing on core consumer brands.

“Bauer has been the proud publisher of Money magazine for 20 years,” Dykzeul says.

“Under the leadership of editor Effie Zahos, it is regarded as one of the most respected finance magazines in Australia with readership figures up 15% year on year. I wish the magazine continued success under the management of Rainmaker.”

The sale of Money and its associated assets comes just four months after it shut Cosmopolitan, after 45 years of publication in Australia.

However, while Dykzeul told AdNews at the time that it decided to close the magazine because it was struggling, the sale of Money comes off the back of increased readership.

Rainmaker Group managing director Chris Page says the acquisition is a milestone moment for the business.

“We look forward to building on the magazine’s reputation as the most-read personal finance title in Australia,” Page says.

Bauer will publish its last Money issue in April, with its editor Effie Zahos saying on at the business under the new role of finance editor, commentator and financial literacy campaigner.