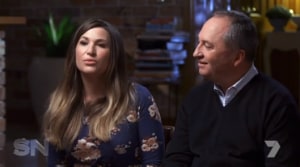 Barnaby Joyce and partner Vikki Campion during their interview on Seven's Sunday Night.

The politician and his former media adviser, Vikki Campion, appeared on Sunday Night to discuss the scandal around their relationship, which drew an audience of 631,000 viewers.

Before launching into the interview, Joyce and Campion acknowledged that they had been paid $150,000 to appear on the program and that the money had been placed in a fund for their newborn baby.

During the interview, the couple dodged various questions about the timing of their relationship and the impacts it had on Joyce's marriage.

Campion also stated that there members of the National Party who, during the time of her pregnancy, pressured her into terminating the pregnancy. Campion refused to share the exact names of those involved.

Reality home improvement show House Rules took out the top spot in all key demographics for the first time this year, drawing in an audience of 882,000 viewers.

Overnight, Seven's show beat both The Voice and MasterChef with its highest rated episode to date.

House Rules has fought an up-and-down battle in the ratings race, fluctuating over the course of the season, going as low as 600,000, but then jumping up to over 800,000 only days apart.

In the primetime slot, Nine's The Voice came in second behind House Rules, drawing in an audience of 816,000.

The show didn't continue the momentum it had generated during Gordon Ramsay week but still managed to draw an audience of 781,000 viewers.

House Rules and MasterChef will go head-to-head again this evening, while Nine will broadcast the rebooted celebrity game show Talkin' Bout Your Generation.

Below is a breakdown of the TV ratings performance, across all the key demographics in commercial share from last week, supplied by Nine.