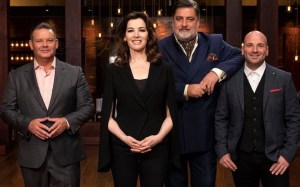 MasterChef has taken out the top spot in all key demographics for the second night in a row, drawing in an audience of 877,000.

The reality cooking program drew in over 70,000 new viewers overnight, improving on its ratings from Sunday and Monday night.

The show also held out against Seven's House Rules which has been experiencing a surge in viewership.

However, the amateur home building competition show failed to continue its momentum from its highest rated episode on Sunday night (798,000), drawing in an audience of 638,000.

Nine came in third, as it aired the final episode of its two-part lifestyle series Eat Well For Less.

Ten's Shark Tank returned for its second episode of the season and experienced healthy ratings growth, jumping up by over 100,000 viewers compared to the season premiere, drawing in an audience of 622,000.

Despite Ten's strong performance in the primetime and evening slots, Seven still won the battle for main channel share, taking an 18.1% overnight share compared to Ten's 17.4%.