Australia has ranked the fourth best country in the WARC 100 rankings, behind the UK, the US and India.

The annual report is a ranking of the world's best marketing campaigns and companies, based on performance in effectiveness and strategy competitions. It specifically splits out brands, agencies, countries and campaigns.

Australian agencies made four of the 10 top ad campaign spots, with Leo Burnett, McCann Melbourne, Affinity and Atomic 212 all scoring a mention.

Atomic 212 was the highest ranking Australian agency on the campaign list, with its ‘Lucy the Robot’ campaign for Double robotics coming third in the top 10 global campaigns. Atomic also scored third position in the top five media agency list for 2017, with Starcom New York and Mindshare New York achieving first and second place. 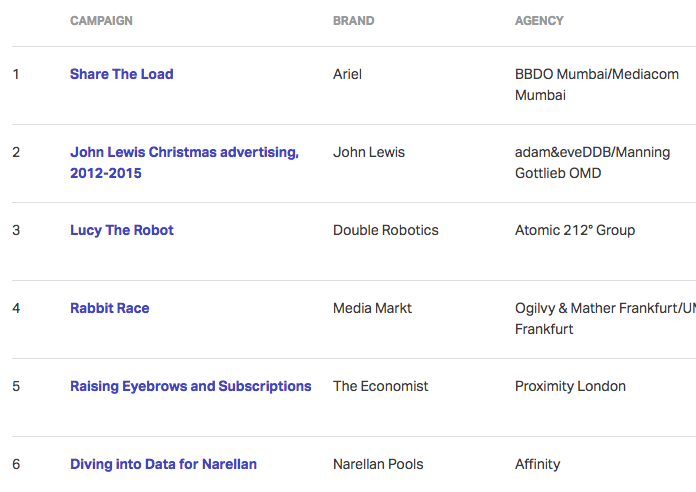 Affinity also took out the second spot in the digital specialist category, behind Proximity London.

Affinity CEO Luke Brown says he is delighted the agency has been named the leading digital/specialist agency in Asia Pacific.

“With all the current talk about the effectiveness and value of programmatic advertising, this recognition from WARC demonstrates that when big data is used creatively and delivered programmatically, it can yield significant results for clients," he says.

McCann Melbourne scored 10th place in the 10 campaigns category with its Infrequent Flyers work for Tigerair.

BBDO Mumbai and Mediacom Mumbai for Procter & Gamble achieved the top campaign gong for work with laundry detergent company, Ariel. The spot challenged gender stereotypes and encouraged families to #ShareTheLoad rather than leave it up to the woman.

The WARC 100 is a ranking of advertising and marketing campaigns that have worked. WARC tracks advertising competitions around the world - all of which require entrants to show the business impact of a campaign, rather than solely recognising the campaign's creativity.