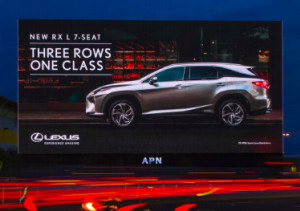 APN Outdoor has retained all of its contracts this year and has a “high strike rate” on new contracts as the business reports a turnaround in financial performance for the first half of this year.

The business, which is soon to be acquired by JCDecaux, extended its NSW Transport Roads and Maritime Services contract by adding 34 new panels, as well as winning contracts for VicRoads, Queensland Fire, Queenstown Airport and Sydney Airport Terminal 3.

“We’re seeing the early benefits of winning back our market share even against the backdrop of the Yarra Trams contract loss from last year,” APN Outdoor CEO and managing director James Warburton said in an investor presentation.

“Whilst in quarter one, our share was below market growth when rebased for Yarra Trams, quarter two ­– the April to June quarter – showed that we actually grew share on that rebasing…the highest share result we’ve had since Q1 2017.”

APN reported an improved financial performance in the first half of 2018, with revenue up 4% to $168.4 million and EBITDA growth of 7% to $39.7 million. If results are adjusted to remove the impact of losing Yarra Trams, revenue grew 9% and EBITDA was up 17%.

The outdoor sector grew by 11% in the first half of the year.

In the past year, APN Outdoor has reset its focus to be a sales and audience led organisation, rather than assets led.

This has involved rolling out the its data and analytics capability Dn’A, which Warburton says has allowed the business to move “upstream”.

Dn'A, which launched in July, uses data sources, such as transactional, survey segmentation and geo-location data to deliver the right assets for a client's target audience. The first phase is built on 34 billion data points, including 4.2 billion transactions, 300 merchant categories and 56 audience segments covering 58,000 geographic areas.

The solution has been presented more than 350 times nationally with 48 active briefs with advertisers.

Warburton said the JCDecaux acquisition, which passed the ACCC this week, is expected to finalise by the end of the year.