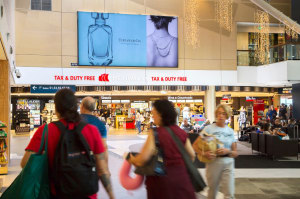 APN Outdoor has signed a new five and a half year deal with Sydney Airport, extending the contract to also cover the T3 Domestic Terminal.

The T3 contract was previously held by out of home rival Ooh!Media and AdNews understand it was worth approximately $10 million.

APN Outdoor’s new contract with Sydney Airport now covers advertising assets across all domestic and international terminals, as well as external billboards approaching and within the Sydney Airport precinct.

The company will take on the rights to T3 on 1 July 2019, marking the first time Sydney Airport has worked with one advertising provider across external billboards and all its terminals.

The extension of the T1 and T2 agreement is effective 1 January 2019.

Sydney Airport said that the new deal with APN will provide local and international advertisers with a greater opportunity to tap into a complete and diverse mix of consumers across its entire network.

“We are very excited about the innovation the partnership between Sydney Airport and APN Outdoor will create, including the development of new digital assets and new ways of using airport advertising that will enhance the passenger experience."

As part of the new agreement, Sydney Airport will upgrade existing advertising assets and develop new assets at T3, which will include the integration of APN's newest data analytics offering, DN'A.

The expansion and extension of APN's agreement with Sydney Airport follows the addition of Queenstown Airport to the company’s New Zealand airport assets earlier this year and the renewal of its contracts with Christchurch Airport and Adelaide and Parafield Airports.

The new deal adds further strength to APN's growing portfolio, as the company awaits the ACCC's approval of its acquisition by international out of home business JCDecaux for $1.2 billion.

"Ooh!Media has been advised that SACL have exercised their renewal rights across the Sydney airport precinct, which includes the Qantas T3 terminal from July 1st 2019,” a spokesperson for Ooh!Media told AdNews.

“This renewal does not affect Ooh!’s Qantas relationship which includes the Qantas Club and Business lounge opportunities nationally.

“Ooh! also continues to deliver Airport advertising across 15 terminals, 17 lounges and 13 cities along with Qantas Inflight Entertainment opportunities, which continues to provide advertisers with a national and international solution that engages this valued audience.”