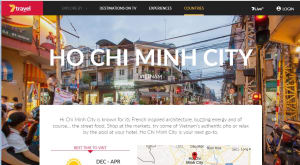 Seven has launched a cross-platform travel and lifestyle vertical 7travel - a 'fusion' of a travel guide and shoppable content for more than 100 global destinations.

“The 7travel vision is to narrow the gap between inspiration and transaction for consumers and partners with a purpose-built experience, connecting Australians to our broadcast content whilst using their mobiles,” Dickens says.

“Seven million have actually travelled in the past year. Through powerful storytelling with 7travel, Seven West Media will deliver - in combination across our television, online and publishing assets - the inspiration, the insights and the transaction for those people to be inspired, learn and action their travel desires like never before,” Burnette adds.

The 7travel site was designed and built by Seven West Media's digital team. While it is a new undertaking for Seven, the company already has a travel vertical under Yahoo!7's 'Be' brand.

It follows speculation about the future of Seven's joint venture with Yahoo following its sale to Verizon Communications.

It also comes as Seven West Media launched its digital-only food title, Foodiful, and brokered a deal with Woolworths as its exclusive retail partner.