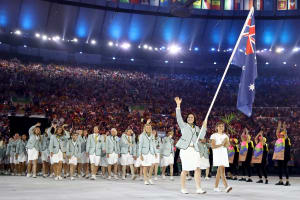 One of the top moments from the #Rio2016 #OpeningCeremony

The free-to-air (FTA) linear TV ratings for the Rio 2016 Olympics Opening Ceremony may be down compared to the 2012 games but Seven's event director, Olympic Games and chief revenue officer, Kurt Burnette, believes it's time we put things into perspective.

Seven’s streaming of the Opening Ceremony of the Rio 2016 Olympics Games has pulled 2.8 million views on the second day of its broadcast.

The catch-up numbers paint a better picture for Seven than the OzTam preliminary overnight ratings, which showed The Games reached 1.608m metro viewers on Saturday morning. The figures are down 15% on the opening of the London Olympics, which rated 1.7m for Nine.

NBC’s Olympic coverage out of the US also saw a decline in viewership, with overnight ratings down 28% from the London event 2012.

Speaking to AdNews from Rio this morning, Burnette says Seven knew the ratings would appear as they did, but adds it's more about the bigger picture, and not just focusing on the negatives of 'linear ratings are down'. He added that perspectives need to shift, just as the content and viewing mechanisms have.

“We've changed the ways we are do things and this is allowing viewers to change the way they view content – so still looking at things such as the linear TV ratings in a traditional sense, alone, no longer makes sense – you have to look at all screens,” Burnette says.

“That's the way we do it. Our clients and partners know it but it's still an education piece to some.”

The streaming figures set a record for Seven, previously seeing 843,000 viewers tune in to watch the Australian open and 488,000 for the launch of its catch up service at last year’s Melbourne Cup.

Seven’s metro and regional figures show 12.4 million tuned in on day one and two to see the Australians take home three gold medals and two bronze.

Twitter was abuzz with conversations around the #OpeningCeremony, with the most tweets surrounding conversations about plants forming the Olympic Rings, the lighting of the cauldron and reactions to Brazil’s interim President Michel Temer.

“We said it's was going to break records and it has. Seven has the greatest aggregate of Olympics content and the fact that yesterday's incredibly strong live streaming numbers broke records, prove this.”

Over the weekend, there were some complaints on social media about the app, with users noting it was freezing and crashing. Telstra tweeted it was working with Seven to fix the issues.

Burnette added that while there may have been a few minor tech issues due to the shear amount of people wanting to get onto the app and catch-up or live stream, this was a “Champagne problem to have” given the audience interest, and that glitch had been rectified.