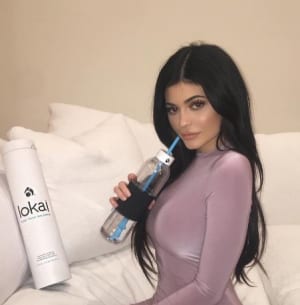 Drinking water for a cause: celeb and influencer Kylie Jenner

Forget Instagram stars or YouTube celebs, Amazon influencers could be the next big thing as the e-commerce giant looks to get in on the action.

Social media influencers with big audiences and plenty of shoppable content postings are being urged to apply to take part in Amazon’s new influencer program. Then, if they meet the requirements, by invitation only they can be part of the new offering.

The e-tailer quietly revealed details of the program, which is currently in beta mode, on its website, saying: “The Amazon Influencer Program is exclusively designed for social media influencers with large followings and a high frequency of posts with shoppable content.

“An intuitive vanity URL makes it easy for customers to find, browse and buy the products introduced to them through social media influencers.

“This program is currently in beta mode and open by invitation only.”

Influencer marketing has been making strides as a media channel, with companies such as Tribe, Social Soup, The Right Fit and Vamp locally making strong tracks. Well known celebs that tap into the movement include the Kardashian and Jenner families.

Detoxing with @fittea 💜 it tastes amazing and the ingredients are all natural 🍵 #ad pic.twitter.com/rjyXxJIzMF

The program allows influencers to earn fees for purchases they drive through their social media platforms, much like its affiliate marketing program. While anyone can sign up to be an Amazon Affiliate, its influencer program has more stringent rules – giving it the strong exclusivity factor.

According to Linqia’s State of the Influencer Marketing survey in the US, in which 170 marketers took part, 94% believe the tactic is effective. Money spent on influencer programs is predicted to double in 2017 and 87% saw it as an effective way of creating authentic brand content.

See here for Will the buzz continue? Influencer predictions for 2017

Amazon says it’ll be reviewing applications on a rolling basis and is currently experiencing a high level of demand.

“As we evaluate requests for invitation to the Amazon Influencer Program, we look at various factors including but not limited to number of followers on various social media platforms, engagement on posts, quality of content and level of relevancy for Amazon.com,” it said.

“There is no set cut-off and influencers across all tiers and categories are represented in the program.”

In February the influencer industry mostly welcomed new guidelines from the Australian Association of National Advertisers (AANA) that dictate brands must disclose where they have paid personalities to promote products on social media. The provision in the AANA Code of ethics states that advertising must be “clearly distinguishable” from surrounding content and enforces that brands don’t “camouflage the fact that it is advertising”, which came into effect on 1 March.

Obsessed with my @FashionNova set 💜 Get it at https://t.co/8gtalORivm #ad 😍 pic.twitter.com/ar0NviVxiK