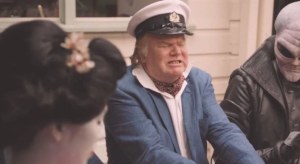 Will the Scientology community speak out?

The latest ad from MLA promoting Australian lamb as the food of all religions has riled up the Hindu community over its portrayal of Lord Ganesha.

While many have been left offended and the ad is now facing being banned, MLA marketer Andrew Howie tells AdNews it wasn’t the brand’s intention.

The ad showed religious figures and prophets, including Jesus, Thor and Zeus and Hindu deity Lord Ganesha, sitting around a large dining table tucking into lamb.

Despite the backlash, Howie stands by the ad campaign and truly believes in lambs ability to bring minorities together.

Q: How would you describe the response to the ad so far?

Andrew Howie: The response to date has overall been very positive. In recent years our media strategy has become more sophisticated. We have the majority of our media spend in digital in spring reflecting the talkability our campaigns generate. We have one of our smallest TV spends ever in fact.

So far all views of the content have been organic. We expect more conversations to start once the paid spend kicks in.

Q: What was the best thing about creating the ad?

AH: As a brand, lamb has sought to bring people together for over 30 years now and our recent You Never Lamb Alone work has really focused on exclusivity. This latest instalment is no different. MLA has relatively small budgets, so we seek to create work that sparks a conversation, ensuring we are able to deliver a strong return for levy payers. The opportunity to create advertising that Australians look forward to watching is humbling.

Q: And the most challenging?

AH: In creating work that generates conversation, we take a lot of time to ensure we consult widely and take on board varying points of view. The reality of creating work that is close to the edge is not everyone is always going to agree with the work you do. Increasingly we also find there are lots of people with opinions on how we could have “made it better”.

Q: Looking at your portfolio of ads, and your personal favourites, where does this one sit in the pecking order? New favourite?

AH: That is like asking me to choose which of my children I love most. I love them all. I am most proud of the fact that as a team we sit down and review the work post campaign, analyse the results and the feedback and seek to improve the next campaign. The fact we have built a portfolio of work that continues to deliver on our brand strategy around unity and bringing people together is something that we are all very proud of.

Q: Were there many changes to the ad from the initial concept? How hard was it to choose who should be sat around the table?

AH: As with any creative process there are always evolutions along the way. We undertook extensive research and consultation along the way to ensure we were respectful of the groups represented. We shot a lot more than what made the edit. That’s often the way with these ads. Things that read well on paper don’t always translate to the screen. The end point is something we are all very proud of and we believe delivers on unity and a message that regardless of opinions, around the dinner table we are all equal.

Q: How worried were you about the reaction to the ad, given previous MLA ads seem to offend some people?

AH: Everyone has high expectations for the work MLA and The Monkeys deliver. This is no different. We wanted to deliver something that all Australians were proud of and could see themselves in. As a diverse and multi-cultural society, Australia is a great country that is accepting of difference and that is what makes it so great. What better way to celebrate that than over a lamb BBQ?

Q: Why choose the topic of religion which is naturally divisive and controversial? Or was that of course part of the plan?

AH: As a brand, lamb has tackled the lack of diversity on our screens, celebrated the fact Australia is great every day of the year and been involved in Mardi Gras – all things that highlight and celebrate the wonderful diversity Australia has to offer. This is no different. In this campaign we have used religion as a proxy for diversity, showing that regardless of faith, belief or lack-there-of, if we set aside our differences, there are great conversations to be had, ideally with lamb on the table.

Q: An American-based Hindu group is urging the ad watchdog to ban the new ad. What do you make of this? And of their reasons for the ban?

AH: MLA is a responsible advertiser and takes the Advertising Code of Ethics very seriously. Lamb is the meat that brings people together. Our “You Never Lamb Alone” campaigns have promoted the value of unity and inclusivity. This latest campaign instalment is no different.

The campaign features gods, prophets and deities from across a wide range of religions alongside atheism, in a clearly fantastic nature, with the intent of being as inclusive as possible. To achieve this we undertook extensive research and consultation.

Our intent is not to offend, but by acknowledging that lamb is a meat consumed by a wide variety of cultures, capture how such a gathering might look if one left their differing views at the door and came to the table with open arms, and minds.

Q: Were you worried about offending any of the religions around the table in the ad?

AH: From the outset the brief was to be respectful and to demonstrate how a meal could look like if we leave our differing views at the door. We undertook consultation and research to ensure we were as authentic as inclusive as possible with the execution of the idea. Our intent is not to offend, but by acknowledging that lamb is a meat consumed by a wide variety of cultures, capture how such a gathering might look if one left their differing views at the door and came to the table with open arms, and minds.

Q: What advice would you give some of the people that may be offended by the ad?

AH: Our intent is not to offend, but by acknowledging that lamb is a meat consumed by a wide variety of cultures, capture how such a gathering might look if one left their differing views at the door and came to the table with open arms, and minds.

As a brand lamb is proud to invite everyone to the table and stand for inclusivity, no matter who you are and what your beliefs are - and this is what this content stands for. As always with our content, we would like people to appreciate that it is clearly fantastical and not intended to offend.

Q: Should people just lighten up?

AH: Everyone is entitles to their opinion. It is the great thing about Australia and the freedom of speech we are afforded. What I would ask is that people see it for what it is trying to demonstrate – that lamb brings people together and regardless of our differences we can come together around the table and unite and connect as just people.

Q: Some people have questioned why Mohammad couldn't make the lamb feast and what the motive was behind this. What do you say to that?

AH: We tried to be inclusive of as many religions and non-religions as possible and that included Islam. The portrayal of Muhammed is not permitted by their religion and in the end came down to the creative execution, humour and the flow of the script.

Q: There's a lot you could do wit this religion/around the table theme. Can we expect this same theme for your next Australia Day ad?

AH: What you can expect is something that once again is based around unity and bringing Australians together. While this campaign looks at unity through the lens of religion, or lack of, and our last spring campaign looked at it through diversity, we can assure you we will deliver something that entertains, gets people talking and most importantly gets people eating lamb. It is not the most effective long term campaign in the country by accident.

Is your audience who you think it is?

AdNews Live! – the new series of events from the AdNews stable – is continuing full steam ahead with the launch of ‘Reframing Australia’ – a half-day Sydney event designed to ‘mythbust’ Australian audiences and demographic breakdowns. See here for more.