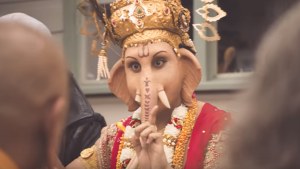 An American-based Hindu group is urging the Australia Advertising Standards Bureau to ban the new You Never Lamb Alone campaign launched by MLA Australia and The Monkeys on Monday.

The ad features gods, goddesses, aliens and religious figures, including Lord Ganesha, coming together over a feast of lamb.

Rajan Zed, president of Universal Society of Hinduiusm, says that the inclusion of Lord Ganesha, a highly revered deity in Hinduism, should not be used to sell lamb meat for "mercantile greed".

Zed says that linking Lord Ganesha with meat was "very disrespectful" and "highly inappropriate". A large proportion of Hindus are vegetarian, however it is not a prerequisite of their religion.

"MLA should be mature enough to understand that love united us and brought us together and not lamb meat," Zed says.

"[The] inappropriate usage of Hindu deities or concepts or symbols for commercial or other agenda was not okay as it hurt the devotees."

Zed urges the MLA board chair Michele Allan and MD Richard Norton to issue an official apology and withdraw the ad immediately.

"Hinduism was the oldest and third largest religion of the world with about 1.1 billion adherents and a rich philosophical thought and it should not be taken frivolously. Symbols of any faith, larger or smaller, should not be mishandled," Zed adds.

The campaign has also riled up Facebook users with several viewers.

One says: "This is a disrespect to Hindu Religion, hurting our sentiments and a senseless campaign. Your team has got it totally wrong by implying Lord Ganesha is having lamb at dinner table with other Gods. For your information Hindu Gods and meat do not go together. I demand an unconditionally apology and you revoke this campaign immediately."

Another Facebook user called out MLA marketer Andrew Howie, saying he could have "written a better brief".

This is not the first, second or even third time MLA and The Monkeys have been at the centre of controversy. MLA's Australia Day and Never Lamb Alone campaigns have faced multiple ad bans for their portrayal of Australian diversity.

What do you think about the MLA's You'll Never Lamb Alone? Feel free to comment on the ad or send your private thoughts to AdNews reporter: lindsaybennett@yaffa.com.au.

The Monkeys and MLA have been approached for comment.