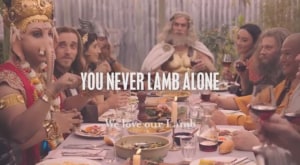 Gods, goddesses and prophets can be seen chowing down on a succulent feast of lamb (and peas) in the latest ad from Meat & Livestock Australia (MLA).

Once again, in cahoots with its agency of record The Monkeys, the creative juices are in full flow for an integrated campaign which builds on the long established 'We Love Our Lamb' brand position.

The new spring lamb campaign says that for every Australian, from every background, lamb is the meat more people can eat, reiterating lamb’s “strategic promise of bringing everyone together” - no matter their background, religious beliefs or dietary requirements.

The content, shot by director Steve Rogers, shows for the first time in history the gods, goddesses and prophets of different faiths and beliefs coming together over lamb at a modern day spring BBQ.

The campaign will be delivered to Australians in a long form film and 30 second TV ads via an integrated media strategy, social amplification, out of home, a bespoke digital media partnership and PR.

To further drive engagement among younger audiences and to reinforce the above-the-line activity, MLA has also partnered with youth publisher Pedestrian to "connect and inspire young Aussies" to cook with lamb. The partnership includes content, simple recipe inspiration and a competition, all centred on shared lamb dishes and coming together with friends.

MLA and The Monkeys are no stranger to controversy with past ads being criticised. It remains to be seen what complaints could roll into the Advertising Standards Board based on the new ad.

So far it's drawn two comments on its Facebook page with one saying: “I don't get it. Why bring religion into it. It's way too risky as a strategy to leverage a marketing campaign on religious commentary or jokes. Lamb is great to eat and easy to cook.”

Group marketing manager at MLA Andrew Howie says: “Since the late 1980s lamb has proved itself as the meat that brings people together.

“More recently under the banner of ‘You Never Lamb Alone’ we have continued to push the creative boundaries. In this latest campaign we are showing no matter your beliefs, background or persuasion, the one thing we can all come together and unite over, is lamb.”

MLA's media agency UM will introduce and drive awareness of the content to Australians through a broadcast strategy across TV, online video and social. To help communicate lamb as “the most inclusive of meats”, this activity will be followed by product-focused messaging across small format transit out of home and a locational-based mobile campaign.

PR will spread lamb’s message of unity and inclusivity through earned media activity, including research exploring the modern-day Australian dinner party, an intimate media event hosted by chef Thi Le at Anchovy, Melbourne, and new recipes to inspire the nation to cook with lamb.

Chief creative officer at The Monkeys Scott Nowell says: “It's a reality of modern Australia that people of all faiths and backgrounds can get along around a table; coming together to celebrate what unites us as a nation. And, Lamb lovers have taught us that we should try to do it more often.”

MLA's spring campaign last year saw outspoken brand link lamb with sexuality, culture and language. In September 2016 MLA tackled head on a notion that had been discussed at length - that there's a lot of the same faces being shown on TV screens and in advertising.