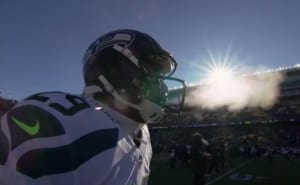 Twitter has won the digital rights to stream NFL games next season in a $10 million deal - a first for a social media platform.

The social media giant will stream all 10 Thursday night games, which are also broadcast by NBC and CBS and simulcast on the cable NFL Network.

It is believed Twitter beat Facebook, Amazon and Verizon for the deal, which is in the last year of a sponsorship deal worth $250 million a year. There are also rumours that Twitter's bid was $5 million below the highest offer, suggesting the NFL views Twitter as an appealing strategic partner.

The move highlights the attraction of live sports to non-traditional media players, and follows recent moves by Optus to secure the rights to the English Premier League.

For Twitter, it's an opportunity to attract eyeballs and advertising after a rocky 12 months.

Twitter has been under pressure as it has struggled to attract as much advertising revenue as rivals Facebook and Instagram, while a raft of senior executives have also left the firm.

In the past year, Twitter's share price has fallen by two-thirds to around $17 on the New York Stock Exchange. After the announcement, Twitter stocks momentarily rallied, increasing by 4.7%, before settling down again to about $17.25 at the time of reporting.

Jody MacDonald, senior associate at sports law at UK firm Couchman, told AdNews the deal represents an interesting twist on how social media has been perceived by sports bodies in the past.

“Historically, many sports bodies viewed social media platforms as a threat and a nuisance due to the ease with which they allow infringing content to be published and shared," she says.

"This has changed in recent times as the benefits to sports bodies of publishing ancillary content around live events on social media themselves have become clear. This deal will no doubt increase the urgency with which sports bodies try to decipher how social media platforms will fit into the landscape of live sports rights in the very near future.”

NFL commissioner Roger Goodell says Twitter is an ideal partner for NFL as fans often use the medium to find out NFL scores, information and gossip.

“Twitter is where live events unfold and is the right partner for the NFL as we take the latest step in serving fans around the world live NFL football,” he says.

“There is a massive amount of NFL-related conversation happening on Twitter during our games and tapping into that audience, in addition to our viewers on broadcast and cable, will ensure Thursday Night Football is seen on an unprecedented number of platforms this season. This agreement also provides additional reach for those brands advertising with our broadcast partners.” 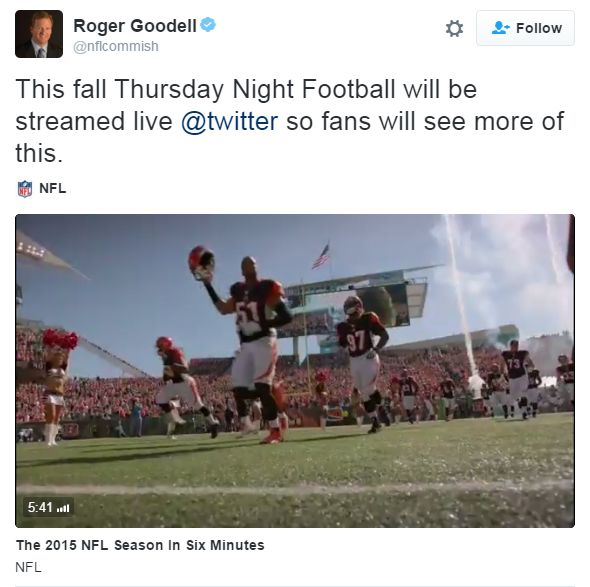 Last season, the NFL formed a partnership with Yahoo! to deliver a free, global live-stream of an NFL game between the Buffalo Bills and Jacksonville Jaguars at London's Wembley Stadium.

Fans streamed more than 480 million minutes of the game with 33% of streams coming from outside the US.

NFL has a very strong penetration level in the US, with 199 million people tuning into last year's regular season. NFL games accounted for the top 25 most watched TV programs while the Super Bowl is regarded as the showcase event for advertisers.