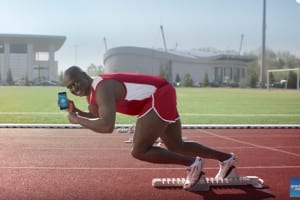 Sportsbet’s ad featuring drug cheat Ben Johnson has been banned by the ad watchdog for promoting the use of performance enhancing drugs.

The ad for Sportsbet’s new Android betting app featured the message “putting the ‘roid in Android”. It centred on sprinter Ben Johnson who won the 100m sprint in the 1988 Seoul Olympics and subsequently had his title stripped days after the race after testing positive to steroids.

When the ad was released, AdNews revealed it was facing a possible ban by the Advertising Standards Bureau (ASB) after garnering more than 100 complaints for iterations of the campaign across pay and free-to-air TV, Facebook and online. At the time, Sportsbet said it had no plans to pull the ad.

The campaign, from creative agency BMF, also attracted the attention of Australian politicians, with sports minister Greg Hunt slamming the ad as “utterly inappropriate” and Senator Nick Xenophon saying it was "wrong on so many levels".

Complaints to the ASB labelled the ad as “absolutely disgusting” and “totally inappropriate”.

“The recent advert featuring Ben Johnson is the most distasteful and disgraceful attempt to lure people into gambling that I have ever seen. I'm embarrassed that an Australian broadcasting company and regulatory body would allow this on TV,” one complainant said.

Others said it sent the wrong message to children: “The flippant interlinking of drug cheats and sports betting is not funny and provides a poor example for younger viewers. It downplays the seriousness of drugs in sport.”

Sportsbet responded saying the ad was clearly a “spoof and parody” and in no way was intended to be a portrayal of a realistic situation.

Sportsbet also rejected claims that it encourages children to use steroids, adding the betting company does not condone the use of performance enhancing drugs. It called for the complaints to be dismissed.

Sportsbet told AdNews it is "beyond pleased" with the results and the feedback from the public. BMF ECD Cam Blackley said the agency makes no apologies for the work.

“Firstly, we are flattered for our work to be noticed and gain such overwhelmingly positive public reviews. We make absolutely no apologies for entertaining the majority and driving great outcomes for our client," Blackley said.

But the ASB considered four different versions of the ad, ultimately ruling to ban the campaign in its entirety.

The board concluded the use of humour does “not necessarily outweigh or justify a message that reasonable people in the community might take from an advertisement”.

“In the board’s view this depiction is done in a way that makes light of their use of a substance that is banned for use in sport. In the board’s view, the use of Ben Johnson in conjunction with a humorous message about drug use conveys a message that there is not a negative side to drug use and cheating, and could be seen as a suggestion that there are benefits to gain from cheating or from behaviour that will enhance your performance.

“The board also considered that, despite the parody, there is little consequence depicted for these actions as the athletes are portrayed in a positive way, rather than showing a negative side to the choices they made in their sporting careers.”

Sportsbet has now pulled the ads.

AdNews recently spoke to the creative behind the Sportsbed ad about when it's right to pull an ad. Read more here.