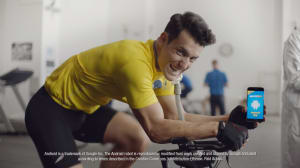 The latest Sportsbet campaign, 'Putting the Roid in Android', has garnered more than 100 complaints and is now facing a possible ban, AdNews can reveal.

The Advertising Standards Bureau (ASB) has received complaints over four different mediums, both pay and free-to-air TV, Facebook and online.

The spoof campaign, featuring drug cheat Ben Johnson who won the 100m sprint in the 1988 Seoul Olympics and subsequently had his title stripped days after the race after testing positive to steroids, pushes Sportsbet's Android app, along with a Lance Armstrong lookalike, a burly Eastern European weightlifter and a muscular Chinese female swimmer.

In addition to the campaign's title, references to drug use are littered throughout the ad as Johnson is introduced with: “When it comes to performance enhancement, Ben really knows his stuff.”

While the ASB cannot provide a sample of the complaints, opinions have been split down the middle across social media, with some calling it “concerning” and telling Sportsbet to “enjoy its TV ban”, while others saying it's “the greatest marketing campaign in recent memory”.

Anyone else concerned about #RoidInAndroid promo by @sportsbetcomau Maybe #NRL clubs they are sponsored by? What message #drugsinsport 😳

So @sportsbet thinks drugs in sport so funny it has a whole ad campaign on it. Usually like the funny, but this is shit. Enjoy your tv ban. pic.twitter.com/k3nK5P6guo

Love the ad! Good on Ben Johnson for jumping on board #RoidinAndroid #positiveforspeedandpower

Sportsbet communications manager Will Byrne tells AdNews the company has no plans to take the ad off air.

“The complaints are calling for us to take it off air, however social media feedback has been overwhelmingly positive,” says Byrne.

“In reality, Ben Johnson was stripped of his titles more than 20 years ago. People need to move on and see the humour in it."

Sportsbet has released a statement on its website addressing the “media sh*t storm” that argues: “There was just one problem with all of this public outrage – the public didn’t seem to be outraged at all. In fact, people kind of liked it.”

Sportsbet also responded to the criticism via its Twitter calling the commotion #FakeNews:

The Media are claiming the public are outraged by our new ad. Meanwhile on the Herald Sun’s story… #fakenews pic.twitter.com/5b737TBCID

The TV spot, was criticised by politicians almost immediately after its release, with sports minister Greg Hunt labelling it “utterly inappropriate”. Senator Nick Xenophon said “it is just wrong on so many levels, glorifying a drug cheat, tying it in with gambling and promoting it to kids in a light-hearted way.”

The spot ends with Johnson winking to the camera: “Even the download time is faster, at a record breaking 10 seconds... even faster if you cut corners”.

Creative agency BMF is behind the ad, with its ECD Cam Blackley saying in the original release: “There are times when you concoct an idea that makes you laugh so much you think ‘nup, we’re never going to get that made’. Well Sportsbet booked our tickets to Romania and here we are. And to work with Ben Johnson, my boyhood hero, that’s the icing.”