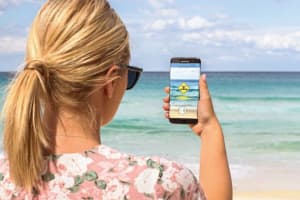 The free Android app is being trialled in partnership with Surf Live Saving Australia for four weeks at Queensland’s Coolum Beach and Alexandra Headland.

Launched as a response to the 12,000 rescues performed each year, the app aims to educate swimmers about beach dangers, from rips and submerged rocks to shallow sandbars.

“Every year we go out to the community and look for projects we feel are significant that we can provide technology to resolve a problem. One of the biggest issues is the lack of awareness of rips,” Newton says.

Newton explains a product like this helps consumers understand the brand’s technology offering that he says is Samsung’s “bread and butter”.

“The app allows us to demonstrate what technology is capable of. What we want to do is bring technology to the hands of consumers and help them us it,” he says.

“The average smartphone today is more powerful than the computer today. The capabilities of GPS, augmented reality and virtual reality are incredible. We want to showcase it.”

Samsung and Leo's have also developed a 360 degree virtual reality (VR) experience to demonstrate what it’s like to be stuck in a rip. It also allows Samsung to promote its VR products.

Grant McAloon and Vince Lagana, joint ECDs at Leo Burnett Sydney say: “Given that brand relevance is increasingly reliant on meaningful connections with people, everyone is looking to do new and exciting things. Part of that is product development.

“It’s a surprising way to bring a brand’s meaning and value to the world as it makes the brand a cultural participant. Suddenly you’re not just an entity talking to people, rather an active part of the world around them.”

The agency says it has seen a rise in appetite for product initiatives, but it’s not suitable for every client.

“Our feeling is that this will mean an increasingly larger space for projects such as this. And that's incredibly exciting,” McAloon and Lagana say.

When asked if the product launch was timed to combat the negative press surrounding Samsung’s exploding Note 7 phone, Newton says Pocket Patrol has been in the works for 12 months.

“The company is enormous. While Note 7 has been an issue, it has been a very tiny part of our company’s operations. It’s a problem but not an issue we are focused on,” he says.