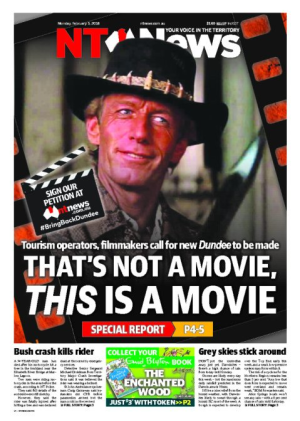 News Corp has launched a national campaign and petition to #bringbackdundee across its national newspapers.

It follows Tourism Australia’s Super Bowl ad that was disguised as a movie trailer for the Crocodile Dundee sequel.

The movie trailer was revealed yesterday during the Super Bowl to be a $36 million Tourism Australia push.

The ad features US Hollywood actor Danny McBride and Aussie heartthrob Chris Hemsworth, as well a cameo from Paul Hogan himself. There were also four fake ad movie trailers launched in the run up.

NT News is kicking off the #bringbackdundee campaign with a petition that already has more than 3400 signatures.

It then rolls out across all News Corp mastheads nationally, in print and online, including all metro, regional and community titles.

ANYONE IN THE US OR THE REST OF THE WORLD WHO WANTS TO SEE HUGH JACKMAN, MARGOT ROBBIE AND CHRIS HEMSWORTH IN A NEW CROCODILE DUNDEE MOVIE, GET ON BOARD AND SIGN THIS PETITION #bringbackdundee #SuperBowl2018 #superbowl https://t.co/VbKYjg5Ey4

“We, the NT News, on behalf of Crocodile Dundee lovers around the world, petition Paul Hogan and actors to create a new instalment of the movie. The Northern Territory wants it, Australia wants it, the world wants it. Stop teasing us and make it happen," the petition reads.

News Corp CCO of publishing Damian Eales says News Corp has the reach to ask people in every corner of the country if it’s time to #bringbackdundee.

"If Paul Hogan needs influencing to be sure how people truly feel about the issue, we’re hoping our petition will make the difference," he says.