Thirty years of Tourism Australia: A history of iconic ads 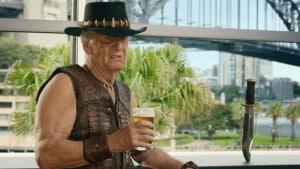 The Dundee Returns campaign, launched today in the US during the Super Bowl, marks the biggest spend from Tourism Australia in any single overseas market at $36 million.

The body has a history of iconic advertising, from Paul Hogan saying G'day, to Lara Bingle yelling 'Where the bloody hell are you?'. We take a look at 30 years of tourism ads.

Feel the Wonder Down Under: 1984 – 1989
The first Australian Tourist Commission television commercial featuring Paul Hogan aired on the west coast of the USA in January 1984. Hogan invited Americans to “Come and say G’day” and experience Australia’s beaches, outback, cities and relaxed lifestyle, adding the classic line, “I’ll slip an extra shrimp on the barbie for you” as well as setting up Australia as the friendliest place in the world.

Responses averaged 1,500 a day and visa applications increased by 40%. The ‘Shrimp’ advertisement is now recognised as a classic in the world of advertising. Current Tourism Australia CMO Lisa Ronson tells AdNews Hogan put Australia on the map and is the "godfather of Australian tourism".

Australia. A Different Light: 2004 – 2006
‘Australia. A different light.’ was the first campaign released under the new branding featuring the iconic kangaroo bounding in the sun. It aimed to draw on the link between the light, the land, and life in Australia.

A Uniquely Australian Invitation: 2006 – 2008
The campaign was uniquely Australian in tone and character and featured the tagline, “Where the Bloody Hell are you?” which catapulted Lara Bingle into the limelight.

Come Walkabout: 2008 – 2009
In 2008, the Australian writer, producer and director Baz Luhrmann produced a destination campaign which leveraged the release of Australia the movie.

Central to the campaign was the concept of ‘walkabout’ – a uniquely Australian concept that is steeped in traditional Aboriginal culture.

There’s Nothing Like Australia: 2010 – Present
This has been the ongoing slogan for TA’s overarching marketing for eight years.

Restaurant Australia -  TA has dropped close to $70 million on this campaign since it launched.
It was created in 2015 in response to the growing demand globally for food and wine as part of the travel experience. It looks to close the gap between perceptions of what Australia has to offer and the reality of our world-class food and wine offering.

Aquatic and Coastal - TA has dropped close to $50 million on this campaign
For the first time this 2016 campaign put Australia’s coast and water at the centre of a campaign. It was fronted by Chris Hemsworth.