Is marketing via chatbionics the next frontier in AI? 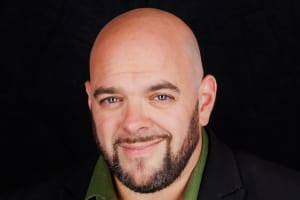 It was reported in Digiday that many "brands have cooled on chatbots" after discovering that most chatbot implementations have been, well, lousy. As I cautioned in a recent AdAge article, CMOs should take caution not to look dumb as they fumble around with artificial intelligence.

The reality of AI is that there are a variety of tiers of implementation, even within the realm of chatbots. At the bottom tier, many chatbots have just become a means of content navigation. Some, like the Quartz app from QZ.com, do this with a bit of cleverness and panache and actually provide a great experience that actually feels conversational. Most do not.

This is because the level of investment gets exponentially higher as you go from simply providing users with multiple choice queries to actually responding to human conversation to actual machine learning.

Most brands experimenting with chatbots have gone the multiple choice route or simply failed. As Digiday points out:

"Facebook said it was “refocusing” its use of AI after its bots hit a failure rate of 70 percent, meaning bots could only get to 30 percent of requests without some sort of human intervention"

Perhaps this is why technology companies are focusing less on bots and more on bot-like enhancements of human-to-human interaction.

At Traction, the agency I run, we are calling this phenomenon chatbionics.

(and I'm totally taking credit if that becomes a buzzword).

In short ... laziness. We want shortcuts. Whether we recognise it or not, we all want our digital communications to move as fast as our minds and be as effortless as thinking.

This is why I hardly ever type to text more than three or four words anymore. As soon as I discovered voice-to-text works really damn well on my iPhone, I started using it all the time.

My iPhone has had chatbionics built into it for awhile. When I do start to type a text, the phone tries to anticipate each word I'm typing and makes suggestions to I can just click to insert it. I use that all the time because I don't like typing long words on a small device. 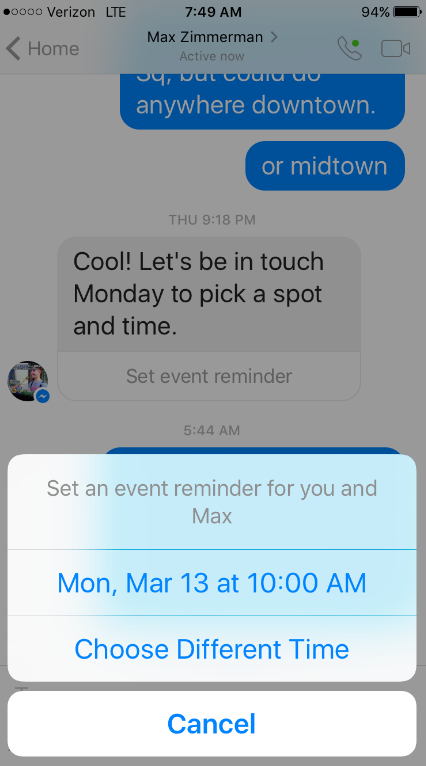 Take this interaction with my cousin Max in Facebook Messenger. I'm in NY next week and we're scheduling lunch. Messenger recognises that we're picking a time on Monday and prompts me to set an event reminder for me and Max.

As Facebook is introducing this technology, it's focused on a single use case (picking a time), but as they improve upon this, it could certainly understand that I'm looking to pick as spot as well. Maybe they suggest I make a reservation on Yelp or OpenTable and get a fee from the restaurant when they do.

This gives a glimpse into the marketing opportunities that AI (and chatbionics in particular) will surface over time, along with an understanding of why technology companies are tripping over themselves to bring their AI play to market.

It depends. I have an Alexa in my kitchen. I allow myself to forget the fact that Alexa is eavesdropping on my conversations with my wife. I can live in this state of blissful denial because Alexa only responds when I say her name. The moment Alexa interrupts an argument with, "You were kind of a a jerk there, Adam. Would you like to apologize with a gift from 1-800-Flowers?" she is getting thrown out the window.

I was recently an advisor to an AI startup called Genee that was acquired by Microsoft last year. Genee also focused on scheduling with a similar vision of expanding into contextual offerings (like asking if you'd like to have a restaurant reservation). But Genee wasn't bionic: the platform sat adjacent to an interaction between humans. You could cc Genee on an email and say, "Genee, schedule a lunch meeting next week;" Genee would find a day and time you're available for lunch, and ask both parties if that time worked. Once they accepted, Genee would ask if they needed help with a reservation.

Genee was not designed to simply eavesdrop on emails and scan for opportunities to ask if it could help because would freak people out. At the same time, as the examples I've shown above illustrate, if used deftly and thoughtfully, chatbionics can offer value without raising an eyebrow.

Colonel Steve Austin used bionics to battle Big Foot. That was awesome. It remains to be seen if chatbionics will be equally as awesome (after all, I just made it up 20 minutes ago), but there's no doubt that it's a Six Million Dollar buzzword—and just maybe a great opportunity for marketers a year or two down the road.