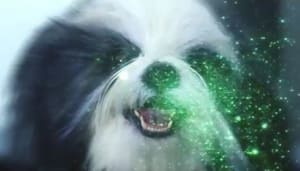 McCann Erickson Japan's robot creative director has released its first work, but its spot is set to go head-to-head against work from a real life human in the ultimate battle for creative supremacy.

The work is for Mondelez brand, Clorets Mint Tabs, with the client commissioning work from the AI creative, as well as asking for work created by a person, and it's getting the Japanese public to vote for the ad they prefer. The twist is, know one knows yet which ad was created by man or machine.

One spot features a calligrapher and the other is of a flying dog. You can watch both ads below, but it will help if you can speak Japanese.

McCann Japan announced its new hire named AI-CD β in March this year, with the agency saying at the time that the robot will be assigned as a creative director to client accounts and will provide creative direction for commercials.

AI-CD β was developed through a new taskforce in the agency, McCann Millennials, a group of staff members born between 1980 and 2000 who apparently care not for the future of their own careers.

What makes AI-CD β particularly impressive is that it can draw from a database of tagged and analysed TV commercials from the past 10 years of winners of the All Japan Radio & Television Commercial Confederation’s annual CM Festival (ACC CM Festival). It also has the ability to learn from its previous campaigns.

McCann Japan creative planner and the founder of McCann Millennials Shun Matsuzaka said previously that his team didn't have a creative director, so they thought, why not create one themselves with artificial intelligence.

“That’s how the Creative Genome Project got started. Our hope is for our AI creative director to work on many projects, gain experience, and to grow into a world-class creative director that will leave a mark in the advertising industry.”

Tell us which ad you think was created by AI-CD β below.