The brand safety risk of advertising against digital video content in Australia has dramatically decreased in the second half of 2016 – a period just prior to the YouTube boycott – an Integral Ad Science report has found.

Brand safety risk has dropped from 12.7% of impressions in the first half to 5% in the second period. The data only measures brand risks that are moderate to high.

However, the risk of ads being served alongside 'hate speech' increased three-fold over the period and now accounts for 9.8% of brand risk impressions.

The figures should provide some comfort to Australian companies and media agencies who have been more cautious, compared to global counterparts, in response to the YouTube boycott.

Only a handful of organisations in Australia, including Telstra, Holden, Kia, Tourism Australia, Bunnings, Foxtel, Caltex and Nestle, have joined a global boycott of advertising on YouTube amid concerns ads are being served against inappropriate content such as extremist videos and hate speech.

Australia is not the only country that has seen brand safety risks decline.

The global brand safety risk fell from 11.2% to 8.9% of impressions in the second half.

For programmatic platforms, such as YouTube, the brand safety risk fell from 10.9% to 9.8% of ad impressions, with 1.4% of these considered 'high' to 'very high'.

Buying direct from publishers presented a risk to 6.4% of the time, with only 0.6% in the 'high' to 'very high' category. Remarkably, this improved from 12.1% of impressions in the first half of the year.

The major brand risk by category was ads being placed against violent content (35.5% of risky impressions served programmatically), adult content (18%) and offensive language (16%). 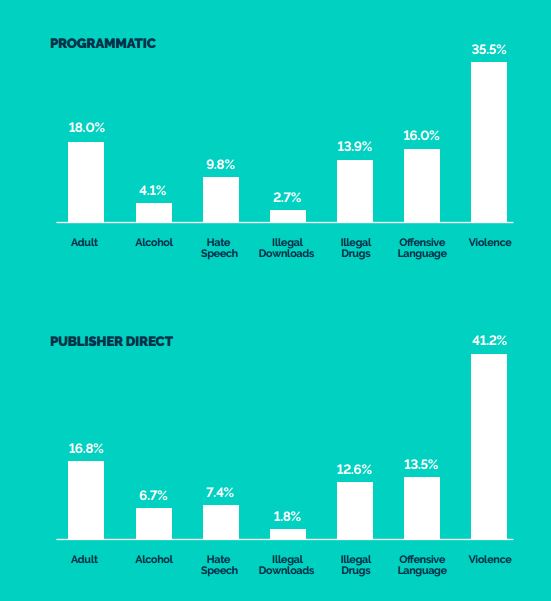