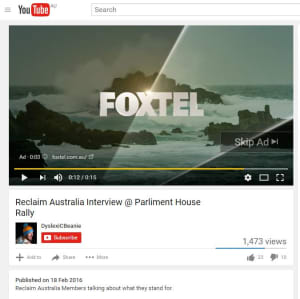 Foxtel has stopped advertising on YouTube after its ads appeared against inappropriate content such as this Reclaim Australia interview filled with hate speech.

Media agencies and advertisers are calling on Google to lower the rates of its premium inventory over brand safety concerns a more Australian companies join the YouTube boycott, including Bunnings, Foxtel, Caltex, Nestle and Vodafone's local business .

WPP's media buying arm GroupM is among the agency groups looking for ways to provide greater security and comfort to advertisers after a month in which more than 200 brands across the world have stopped advertising on YouTube and Google's Display Network after ads were found to be placed next to inappropriate content by extremists, the Financial Times reports.

GroupM's chief digital officer Rob Norman told the FT that advertisers are looking for all of their ads to run against premium, targeted content to ensure brand safety, but did not feel inclined to pay premium rates.

“All media premiums go up with targeting,” Norman said. “Advertisers will negotiate a reduction in those premiums in order to restrict themselves to much safer channels.”

Norman said GroupM is in constant dialogue with Google to also look at other ways brand safety can be tightened.

Havas UK is the first media agency to stop advertising on YouTube and GDN on behalf of its clients. While other agency groups have stopped short of a boycott, several have publicly warned Google it needed to do more to appease frustrated advertisers.