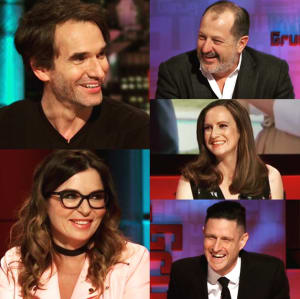 During last night's ABC TV show Gruen, which focuses on the latest hot topics in advertising, it was telco Telstra that captured the attention of panellists.

In the coffee category, the panelists looked at how ads from Nespresso, Moccona and Nestle tap into the emotional relationship consumers have with the caffeinated drink. They also discussed how brands are using irrelevant hashtags in campaigns, such as #FanUpAus in Optus' recent Olympic push.

On the subject of Telstra's new brand campaign which launched on 17 July and aims to evoke the “magic of technology”, complete with a new tag-line of 'thrive on', Anderson questioned what the brand actually meant by this and poked fun at the so-called new slogan.

Sampson said the strategy underneath it was interesting. “They are trying to say we are moving from a telecommunications company that charges people money, to a tech company that empowers people to do interesting things in their lives,” Sampson said.

“The other thing they are trying to do is they are trying to say it's not about us, as all the Telstra ads are always about them, but instead it's about 'you' - but the timing is terrible, the line is weird, it's just weird – and the giant is a little bit weird.”

Spend less on ads and more on service

Also on the panel was executive creative director Campaign Edge, Dee Madigan. She said she liked the Telstra ad when she first saw it. “But then after last week, after my eighth phone call to a Telstra call centre, I thought I wished they had spent less on the ad and more on the damn call centres.

Howcroft argued Telstra doesn't really need 'a line' per se, but added that if a brand really wanted the public to think of them differently, it had to really “change its clothes”; change the brand; change the design of logo and really “go for it”.

“They need to be a better company and then the advertising should follow,” Sampson added.

Panellist and head of planning at creative shop BMF, Alison Tilling, added that whatever Telstra was going to do, the public would “bash them for it” and that 'thrive' had potential as the word of the moment – noting that as long at Telstra go on and build on the platform they've started, it “could be interesting”.

Anderson questioned whether if the customers were grumpy, if they then saw a big ad spin on TV all the time would this just remind them to be grumpy?

Telstra needs be seen to be the leader

Madigan was quick to add that people are fairly lazy and while the ad may annoy customers, the other telcos aren't much better so it won't see Telstra actually lose customers.

Tilling said that customers aren't the only audience for this ad, highlighting that it needs to keep employees interested as well as keep shareholders and fund managers happy.

“They need to be seen to be the leader – they need to do something big and bold,” she said.

The new campaign arrived just as the telco was being taken to court by the Australian Olympic Committee (AOC) over allegations its Olympic-related adverts are misleading and imply the telco is a team sponsor.

However last week the Australian Federal Court has ruled in Telstra's favour, with Federal Court Justice Wigney dismissing an application by the AOC to stop Telstra running the ad.

In case you missed it, check it out here:

For more on Telstra:

CMO Pollard on Telstra's evolution from 'telco to techco'