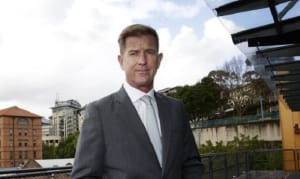 Seven West Media boss Tim Worner has resigned from the board of AFL team the Sydney Swans amid mounting pressure over his court battle with a former employee Amber Harrison.

Media reports suggest Worner's position on the Swans board has been questioned by powerful women at the club, including new board member Sam Mostyn. Worner joined the board in February 2016.

“My hope is that by standing down, I can relieve pressure on the board and the club and let them concentrate on the business of football, and a successful home and away season in 2017,” Worner says in a statement.

“During last year, working alongside some of the best business and sporting brains in the industry was a privilege - and an experience I'm most grateful for.

“As the club surges towards the last weekend in September, I'll be right there beside them and wish them every success.”

The Swans saga highlights the mounting pressure on Worner, who is locked in a protracted and bitter court battle with Harrison over the way she alleges she was treated by Seven when her affair with Worner became public at the end of last year.

Worner didn't attend the first Swans home match of the season and questions have been raised about whether he would be able to attend public functions while the dispute continues to generate negative publicity in the press.

Seven West Media have maintained that Harrison breached the conditions of settlement with media company and are seeking a permanent gagging order be placed on her.

Harrison is trying to get the entire dispute transferred to the Federal Court in Melbourne to be heard alongside a workplace relations claim she has made against her former employer.

An internal inquiry led by Richard Harris, a litigation and investigations partner at law firm Allens Linklaters, cleared Worner of misconduct, including any involvement in the way the company treated Harrison, the awarding of a bonus to Harrison and claims he influenced her to "misuse a company credit card".

Harrison has disputed the findings and maintains she was mistreated by Seven West Media and subject to a witch hunt.