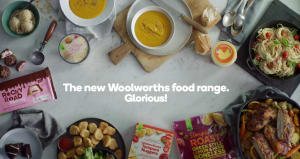 Woolworths has kicked off a major ad campaign to support the relaunch of it homebrand food range.

The food overhaul sees the end of Woolworth's 'Select' food brand, which was a transitioning range designed to fill the shelves before the new offering was launched.

It has been developed with nutritionists and chefs to create a "health concious, quality range" and is described as 'glorious' in the ad campaign.

The campaign was created by M&C Saatchi and is running across TV, OOH and digital and is supported by in-store activations.

Woolworths has also launched a sampling site called 'The Bunch' where Woolworths customers are invited to try products from the Woolworths food range and share their ratings and reviews on the platform.

Speaking with AdNews, a Woolworths spokesperson says: “The review, reformulation and rebrand of our Woolworths food range has been over 18 months in the making and we have taken the time to ensure that we are constantly improving and making our customer’s shopping basket full of great quality and healthier options, that are also great value.”

The new prodcuts have been rolled out to stores over the last 18 months after being road tested by customers.

The food range will also feature the new 'green seal of approval' which ensures "high quality produce that has been created by Woolworths nutritionists and chefs".

Woolworths GM of marketing Peter Hathaway says: “The Woolworths food range is also leading the way in improvements being made to product transparency on packaging with Health Star Ratings and Country of Origin labeling being rolled out across the range."