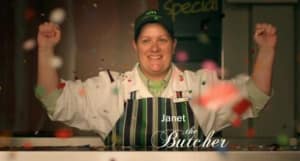 Supermarket behemoth Woolworths has repositioned itself as 'Australia's Fresh Food People' in its new multi-million dollar campaign, as the brand sets it sights on fighting off encroaching competitors Coles and Aldi.

The campaign, which launched last night, claims to "address key customer issues around sourcing, quality and freshness", according to the statement from Woolworths. It features nine real Woolies staff hand picked out of a possible 400. The ad sourced its on-screen talent via a nationwide casting call, and was shot by four film crews simultaneously across the country.

Managing director of Woolworths Supermarkets and Petrol, Tjeerd Jegen, said: "We have a proud history at Woolworths of bringing Australians outstanding fresh food and value.

"By serving Australians with great quality fresh food from our very own backyard, as well as great value, we will live up to our ambition to be Australia's most trusted brand. Ultimately we want shoppers to know that when they buy their fresh food with us they can feel proud that they are supporting a great Australian company as well as Australian farmers and suppliers.

“Our renewed focus on our people is testament to the faith we have that Woolworths’ people are our greatest asset."

The ad also features Woolworths' new theme song, the first in 25 years, which is a Gossling cover of the 1940's song 'Monday, Tuesday Wednesday - I Love You.

Jegen commented that the theme song "highlights the rhythm of the seasons and celebrates that every day, every week, every month of the year, Woolies people open the doors to our stores and bake the freshest bread, serve the freshest fruit and veg and the best quality Australian meat and seafood.”

The broader campaign encompasses a microsite inviting shoppers to 'Meet Australia's Fresh Food People' fronting the spots, and features interviews, behind the scenes footage and the making of the music track. Two additional spots are set to launch tonight, with the campaign set to feature 12 commercials in total.

What do you think of the campaign? Let us know your thoughts in the comments below.