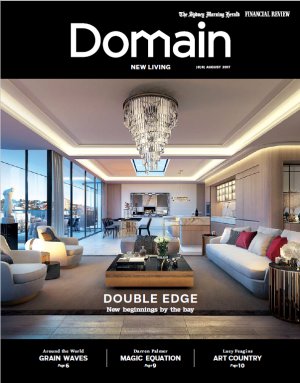 The August edition of Domain Magazine

Launching a magazine in a challenging print market is a big move for any brand, but the move has paid off for Domain, reaching a record 1.6 million readers in the month of June.

Not only is the magazine growing readership since its launch in February, but it is attracting a raft of new advertisers such as Rolex, BMW and Harvey Norman.

Domain national editor Alice Stolz credits the success of Domain Magazine to its recently introduced lifestyle content and the publisher's heritage in print.

It’s been so successful it has now become the poster child for Fairfax’s other premium publications as they look to introduce more glossy magazines.

“We’ve explored the other ends of the property lifecycle to take the magazine beyond only appealing to privileged Australians that can afford to own a house,” Stolz says.

“Not everyone has the luxury of living in a five-bedroom home and we refreshed our content to reflect that when we introduced more lifestyle content.”

Stolz says the property lifestyle content boomed on social media and led to a huge surge in audiences, which led the team to question why they weren’t doing the same thing in print.

“People are coming back to the luxury of something tangible, which we’ve seen in the success of Domain. Domain Magazine is fleshing out the once emaciated propery section of the paper and bringing a renaissance to weekend newspapers, which are beginning to see it become meaty again” Stolz says.

In June, 62% of The Sydney Morning Herald readers read the Domain Magazine, up from 54% last year. 65% of The Age readers read the publication, an increase from 57% - showing the magazine is growing in popularity with masthead readers.

The popularity of Domain could potentially give Fairfax titles a boost in weekend readership.

Stolz says the Fairfax titles were inspired by Domain’s investment in print and decided to “smarten up” its own offering.

Cross pollination across the Domain portfolio is incredibly important for the property publisher, using the magazine to drive downloads of its app.

“Everyone is trying to get a little piece of what we are doing. I know that other's think they are able to do it at the level we are, but the proof is in the pudding with our recent readership figures and the responses of our clients,” Stolz says.

“Instead of all the stories about cut and decline, we are improving in a challenged market and know we'll continue to grow.”