Why Fairfax is looking to luxury and moving in on males 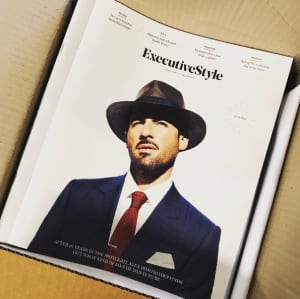 Fairfax is hoping to tap into the wave of overseas luxury retail brands arriving in Australia and stand out against rivals with its new men’s magazine Executive Style.

European-based luxury companies Richemont, Kering and LVMH, which last year generated more than $80 billion in global sales combined, are all looking to open stores in Sydney, Melbourne and are bringing big ad budgets.

Launched last week, Fairfax went against the grain and launched a men's magazine within The Age and The Sydney Morning Herald.

“Over the last 18 months brands have been expanding their presence as well as new brands opening their doors.

“Luxury brands are refocusing from China, which was previously a huge priority, but as that market lags, their next priority is Australia and we are ready to benefit.”

For the first issue of the quarterly magazine, which is the print product of Fairfax’s luxury lifestyle market Executive Style, Cartier, Hugo Bass, MontBlanc, Bvlgari, Rolex joined as launch partners.

“Executive Style started in 2008 as a news print page in the Sydney Morning Herald and The Age. It gained a loyal online following and then in 2015 we launched it as a standalone website. It’s been highly successful both with audiences and advertisers in the premium space,” Corbett says.

“With new brands coming to Australia we thought now was a good time to take the brand from digital-only to a print platform that will also give us access to events.”

Growth in the luxury market has been driven by the increasing amount of Asian tourists whose demand for Swish watches, lavish handbags and designer clothes has pushed growth in luxury retail to 11% a year over the five years to 2016-17, to reach $1.8 billion, according to industry analyst IBISWorld.

“I saw the announcement about Junkee but I wouldn’t see them as a core competitor to us. They are doing their own thing which is targeting millennials but that’s not really core to what they are known for,” Corbett says.

“Our big advantage is Fairfax’s longevity in the premium AB space, with The Australian Financial Review and Sunday Life. We are coming from a place of strength, which is our core offering.”

While the luxury magazine market is getting more crowded, Fairfax’s point of difference could be its focus on males.

News Corp, Bauer, Nine and Pacific Magazines have all launched female-focused titles in the last 12 months, whereas Fairfax’s new title targets men aged 20-60 with the average income of $100,000.

“We were looking at our current suite of products and saw that extending Executive Style would identify the gap in our current offering. We already have premium female lifestyle titles in Sunday Life and Daily Life so it was a natural evolution to focus on men.”