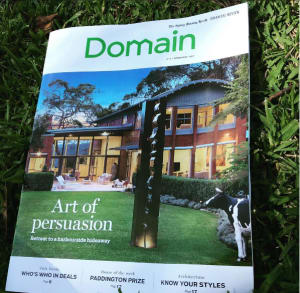 A new chapter for Domain

Launching a magazine in a challenged print market is a big move for any brand, but for Domain it was a necessity, explains chief editorial and marketing officer Melina Cruickshank.

“We had let the print product lose its way over the last five years,” Cruickshank admits to AdNews.

As Domain grew out its branded content arm and social presence, the real estate business realised its print offering, that being a newspaper pull out section, was lagging behind and there was a huge commercial demand for this type of magazine.

“Print had become out weakest channel,” she says.

“The feedback about improving our print product was growing. We needed a new editorial product and a new commercial approach.”

The Domain magazine has two covers, one focusing on property and the other lifestyle

The magazine launched last week in the Fairfax-owned Australian Financial Review, featuring the latest properties to hit the market as well as lifestyle features, market insights and neighbourhood profiles.

The supplement will be published in the AFR on Fridays and repeated in The Sydney Morning Herald and The Age on Saturday.

For its first issue, Domain secured many big brands advertisers including Rolex, AGL, ANZ and HSBC as well as many real estate businesses. Cruickshank says it launches off the back of “consistent” commercial feedback.

“The team worked closely with some of our most important advertisers such as CBRE and Colliers on what they wanted in a print product and they’ve helped shape the approach such as the premium style and ‘flip’ cover concept,” Cruickshank says.

“Some of the biggest real estate agents in the country were taken through the plans and we felt their support straight away.”

Domain has been consistently building out its content offering, aggressively expanding to become a lifestyle brand and investing in its video series, Avalon Now.

While the business is busy building out digital and video assets, it still views print as an important part of the mix.

“The magazine is targeted towards new audiences. My background is in digital publishing but I now respect print as a key performance mechanism since I started working at Domain. It seriously works as part of the mix,” Cruickshank says.

“We also know that print is a critically important part of the media mix to engage buyers at the early stages of their search.”

The number one goal of the new team is to drive results for advertisers, with Domain Media Group director Simon Kent currently out in market with the magazine.

“We work closely with advertisers. Real estate agents are very honest in their feedback," Cruickshank says.

"If a campaign doesn’t work, they will let you know. They are looking for quality enquiry via Domain, simple as that. They convert the enquiry into a transaction."

The appetite for a glossy publication from Domain was explored by the company last year, with the launch of its first weekly magazine out of Geelong, Victoria.

Domain and REA have a long-standing rivalry, which recently came to a head with a Federal Court case that saw both sides claim victory.

When asked how she thought REA would feel about the new magazine, Cruickshank said: “Hopefully they will feel pure joy.

"There is a lot of noise between REA and Domain. Both businesses attract talented and passionate people and there is enough room in the market for both of us. I think it’s fantastic to have two Australian born and bred businesses doing so well.”