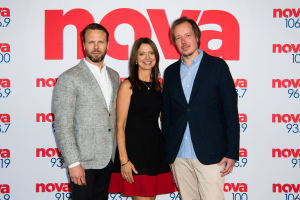 Hot on the heels of its brand overhaul Nova has inked a deal with the podcast powerhouse that hosts content from major publishers such as The Guardian and The Financial Times.

“As of this afternoon we signed a major partnership with a global podcast company. This is a terrific technology platform, it is global best practice in podcasting and we expect to be bringing new opportunities to the market by way of this really exciting and emerging platform,” O'Connor announced.

It's about to explode

Speaking to AdNews, founder and CEO of Acast, Mans Ulvestam, said the Australian data it has from its current global podcast partners shows users here have rapidly increased within the space of a year, rocketing from one million users to 1.9 million users – illustrating the potential for creators and advertisers.

“The consumption of podcasts in Australia has doubled. The podcast market is about to explode and we want to be there when it does,” Ulvestam said.

He said podcasting in Australia is still nascent, lacks a professional element and decent clear metrics and measurement insights.

By hosting a podcast via Acast a greater level of data can be explored such as exact geography of users, exact times listeners drop-off during podcasts and it can also pull in data such as age and gender, he explained. It also allows the dynamic insertion of ads within podcasts.

Acast will host, distribute and monetise Nova's podcasts on a global scale, but the key difference in the partnership, and unlike Acast's deals with other global partners, sees Nova retain a local podcast sales team on the ground as well.

“We monetise our other partners content globally, dynamically and programatically, but with Nova they will be able to choose what local ads they have here,” Ulvestam said.

In November one of Nova's rivals, Southern Cross Austereo (SCA), inked its own advertiser-supported podcast deal with PodcastOne. At the time SCA said the joint venture represents the first international partnership of this magnitude in the commercial podcast industry with the companies together developing and producing content for both the US and Australia. The move was PodcastOne’s first partnership outside of the US.

Taking risks and being brave

Also at the event, O'Connor outlined Nova's strength in market and said that in a radio market that has grown 2.5% over the last seven years, it has experienced a compound annual growth in revenue of 8.5% and an EBITDA of 21% over seven years. She commended 'brave' clients and agencies for buying into the risk that is involved in being creative to drive that growth.

She went on to say Nova plans to keep its foot on the accelerator as it's on a roll, adding that digital and data remains a key area of focus, as well as a refinement in media strategy to allow more laser-focused targeting.

“We can now not just talk about big audiences, but we can start to talk to you in more detail about addressable audiences and we are going to lead the radio selector in this pursuit and we are well positioned to do this,” she said.

“To be a multi-platform business, central to that, it all starts at having strong brands and we had a real focus on building not just a radio station, but a brand - and Red Room is an extension of this.

“The Nova Red Room typifies the opportunity more broadly for media to really think beyond the medium it first originated from.”

Late last year Nova Entertainment ramped up its data play thanks to a new partnership with real-time people-based marketing business Signal. The Australian entertainment company, which houses the likes of popular radio station Smooth FM and shows such as Nova's Fitzy & Wippa, said it would be zoning in on consumer targeting using newly accessible first party data, as well as third party data from Signal. The new offering is called 'Nova Unite'.