“A tribute to our man Dan”

Hoards of industry folk as well as friends and family will gather this Tuesday November 29 to celebrate the life of Dan Sheppard, aged 32, who sadly lost his battle with bowel cancer last week. Sheppard joined recruitment consultancy Xpand Group in 2013 and helped place top talent across the ad tech space in Australia. In May, just weeks after his sudden diagnosis, in which he was given six months to live, nearly 300 industry people rallied together for a charity bash to support the well-known programmatic consultant and industry recruiter. In just one week industry heavyweights such as Google, AOL, eBay, Havas, Gumtree, OMD, Quantcast and Yahoo7 jumped into support the event. A service will be held at 3pm in the Magnolia Chapel at the Macquarie Park Cemetery and Crematorium. There's plenty of parking on site and no dress code. Afterwards there will be a gathering at North Bondi Bowls Club. All welcome to both the service and wake. See here for: Photos: Adland unites, eBay scores, $10k raised in Dan Sheppard Cup

Southern Cross Austereo (SCA) and advertiser-supported US podcast network PodcastOne have inked long-term deal to create PodcastOne Australia. SCA will operate PodcastOne Australia as the exclusive partner in Australia and New Zealand with select SCA podcasts made available in the US. PodcastOne is said to be the largest advertiser-supported podcast network in the US, delivering more than 200 programs, with more than 350 hours of original weekly episodes, which were downloaded 1.5 billion times last year. SCA says the joint venture represents the first international partnership of this magnitude in the commercial podcast industry with the companies together developing and producing content for both the US and Australia. This is PodcastOne’s first partnership outside of the US and it will be available early in 2017 via mobile app and website. Grant Tothill, currently head of strategic partnerships at SCA, has been appointed to the newly created position of SCA head of podcasting to run the new business.

For the first time ever, Neighbours fans will be able to get their dose of Ramsay Street drama over the show’s summer break thanks to a special series of 10 webisodes starting on 5 December. Network Ten general manager of digital, Liz Baldwin, said Ten is ramping up its Tenplay catch-up service as many of its biggest hits will be available to watch in full, on-demand, anytime and on any device. Along with its first-ever Neighbours online summer series, fans can also relive the first four seasons of The Bachelor Australia, The Bachelorette Australia, MasterChef and more.

Bauer Media aims to capitalise on the trend towards apartment living and Australia’s property obsession with a one-off magazine called Smart Spaces. The magazine, which comes out of Belle, has secured Mirvac, Smeg, Blum and Domayne as advertisers. The 100-page title will cover international and Australian apartments as well as decorating and styling inspiration. It was launched off the back of research that found apartments now represent 46% of all approved dwellings. It will be included with subscription copies of Belle and other Bauer premium titles.

Can superfans bring back a show... again?

After nearly a decade off TV screens, Netflix brought back the much-loved Gilmore Girls on Friday. Following its return Twitter exploded with reactions to the new four-part series with many now begging for another series. Given 'the last four words', (no spoilers from AdNews) it seems yet again this is not quite the end of the Gilmore Girls – just maybe sooner than the previous nine-year wait. It's thought the up-tick in social media posts helped tip Netflix and the original show's crew over the edge toward a reunion. When the revival was announced and confirmed in October, 132,158 tweets were posted just in three days.

According to Meltwater, a social media monitoring business which creates sentiment indexes based on online discussions, from Friday to Sunday, since Gilmore Girls premiered on Netflix, there were 72,366 conversations on social media around the show. This includes Twitter, blogs, Facebook and others. It says overall, negative sentiment wasn't about the show itself, but rather people's reactions to the ending, or being upset that it was too short. 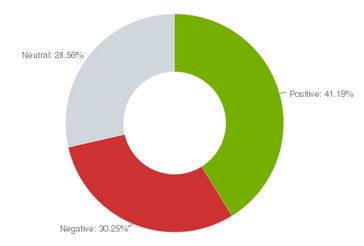