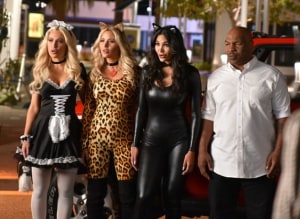 The latest Ultra Tune ad featuring Mike Tyson is facing a ban from TV as more than 40 complaints have been made to the Advertising Standards Bureau (ASB).

The ad watchdog says complaints have been made on the basis of discrimination and objectification.

A spokesperson from the ASB said she was unable to comment any further on the nature of complaints until a determination is made by the board.

The ad stars celebrity boxer Mike Tyson coming to the rescue of three women who have run of the road after encountering his pet tiger.

The ad, which has been running frequently during the Australian Open, has already come under fire this week on 3AW.

Presenter Neil Mitchell questioned if the auto company should be promoting its brand using convicted rapist Mike Tyson, who previously served time in jail for the crime.

Ultra Tune national marketing manager Rod Cedaro says the brand is in the midst of responding to the ASB in the time-frame required, but declined to comment further.

Ultra Tune is no stranger to controversy, in fact it has become synonymous with its advertising and is now part of its overall strategy.

It's Unexpected spot, which featured two women attempt to put out a fire but instead drench each other, was the most complained about ad of 2017.