Traditional TV not the way to target millennials - Vice strategist 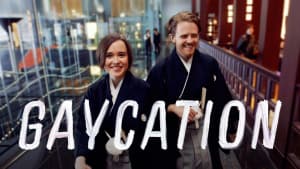 Gaycation is one of Viceland's successful television documentary series hosted by Ellen Page and Ian Daniel.

People aren’t watching TV like they used to, Kimberley told AdNews. She says with the rise of YouTube videos and SVOD players, the attention of younger demographics has shifted.

Last week, Vice announced it was partnering with SBS to bring millennial-targeted TV network, Viceland, to Australia. SBS will own and operate the channel on the SBS 2 channel spectrum later this year.

“TV can be a really efficient way to build brands and brand awareness, but it’s increasingly not the way to target millennials," she says.

“Until there are specialist channels, TV shouldn’t be the be all and end all of advertising spend. It should be an afterthought."

But they won't host the traditional ad format on the network, with the alternative media company focusing on branded content "pods", likely to be produced by Vice’s in-house creative agency.

“Advertising on Viceland will be completely different to what people are used to seeing,” Kimberley says

Kimberley believes millennials are aware of the world they live in and know the necessity of ads, but Vice also wants the ads to fit seamlessly into the content and not be disruptive to the overall consumer experience.

She says the focus will be on relevant ads, which tie into the content being broadcasted to showcase Vice’s "bespoke advertising talent".

“If you create good content on accessible platforms, the millennials will come. But TV in Australia isn’t doing that at the moment,” Kimberley adds.

Last week, an Ipsos study found the barrage of reality programs on free-to-air TV is turning people away from channels like Network Ten, Nine and Seven.

Kimberley has seen evidence of this trend, with young people craving information TV is not providing.

“There are two big things happening in media right now – the rise of video as a static medium and the idea of education as entertainment.

“Smart is the new cool to millennials and that is a big trend we see at Vice in our documentaries and our podcasts,” she says.

Vice originated from a Montreal-based magazine founded in 1994. Since then, it has become a young adult focused digital media phenomenon with a focus on alternative documentaries, dealing with topics such as donkey sex and travelling in North Korea.

Got something to say on this? Email lindsaybennett@yaffa.com.au