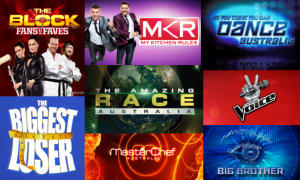 Have we reached peak reality TV yet?

A "dumbing down" of commercial TV programming and the growth of digital alternatives is turning viewers away from free-to-air (FTA) and pay TV, a study by Ipsos has found.

The bi-annual Mind and Mood report found almost one-in-five people (17%) don't watch linear TV and some viewers are tiring of the seemingly endless conveyor belt of reality TV programs being pushed out by the commercial networks.

This year reality TV has delivered a mixed bag in ratings. While My Kitchen Rules, MasterChef, The Voice and I'm a Celebrity Get Me Out of Here have been hits, others reality shows have flopped, none more spectacularly than Reno Rumble, which was eventually hooked from its primetime slot.

Networks are also trialing new concepts with mixed results. In May, Seven launched its new dating experiment Kiss Bang Love, which failed to hit it off with Australian audiences.

This week, Nine launched an Australian version of The Briefcase, a reality show that was cancelled and called the worst TV show ever by Time magazine. In the show, two families are given $100,000 each in a test to see if they keep the cash or give it away as they discover relatives in financial turmoil.

“TV is being criticised by consumers for dumbing down its content. People don’t think they are getting the ‘real’ story from TV,” Demasi says.

“Consumers aren’t wrong about the content. TV programming is full of reality and maybe the networks have gone too far down that road.”

Demasi says the proliferation of reality TV is pushing people away from FTA and towards SVOD players like Netflix, podcasts and documentaries.

“I’m not surprised with the rise of streaming,” says Demasi. “It started because people couldn’t get the content they wanted. Now that there’s so much competition, TV stations are in a difficult position. Unless they lift their game, people will tune out."

Although Demasi says the “one-way broadcast model is over”, TV chiefs believe linear TV is as relevant to consumers and advertisers today as it ever has been.

Burnette strongly refutes the Ipsos findings and says the popularity of catch-up services is actually driving audience engagement because it provides viewers with greater flexibility to watch shows when they want.

“TV drives the agenda and the conversation now more than ever,” Burnette says.

“As the landscape changes people are watching differently, there is no debate there, but this is a battle of video and our numbers. Qualitative and quantitative studies clearly show Australians are still watching and spending the vast majority of their time watching video on television in addition to other forms.”

In October last year, an Edison Research study, commissioned by Seven, found 85% of people regard linear TV as their top source of video content, and a growing number are watching content across a multitude of screens.

Howcroft tells AdNews it's important to remember that while one in five people are watching TV differently, the majority are still watching it.

“80% of audiences are still watching TV. TV in all forms remains ineffable when it comes to reach. Marketers know where the value lies and the power of broadcast TV,” Howcroft says.

He points to Coles as a brand that has done well out of reality TV, with sales surging after it partnered Ten's hit show MasterChef in 2009.

“Podcasts and documentaries all have a role to play," he adds. "They can also provide advertisers will opportunities, but let's not underestimate the power of TV."