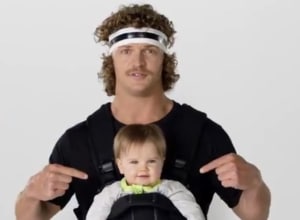 Riding off the success of this year's season of The Bachelor, Tradie underwear has released a new ad campaign featuring its ambassador, Nick the HoneyBadger, Cummins

The ads were heavily featured during the breaks of Wednesday and Thursday night's screening of the reality TV series.

Cummins' season has attracted mass viewership since its premiere, accumulating 940 000 metro viewers on the night of its premiere alone. Using this to its advantage, Tradie took the acclaimed bachelor and paired him with a baby to evoke a reaction from its audience.

Cummims has been the star of many Tradie ads since 2015, previously sharing the limelight with famous Australian athletes Danielle Scott and Kelly Cartwright.

This new ad features Cummins holding a small baby as Tradie promotes its new 'Tradie Baby' collection. In an attempt to make the ads more family friendly, the famous slogan 'The Ultimate Toolbox' that ends Tradie's ads was ditched. In its place, Tradie had Australia's favourite Wallaby finish with 'Tiny tough'.

However, not all aspects of the usual ads were lost. Tradie was able to retain its trademark 'Aussie' behaviour, amid the new addition to the set. Slang like 'G'Day' and 'Fair Dinkum' was intertwined into the bachelor's dialogue as he managed his new co-star.

After he was revealed as the show's star, GM and owner of Tradie underwear, Ben Goodfellow, told AdNews: “That made us known to a lot more Australians and sales spiked for sure. It was significant, well and truly in the double digits."

Goodfellow said at the time that he was unaware that his long-time ambassador Cummins was set to become the newest Bachelor.