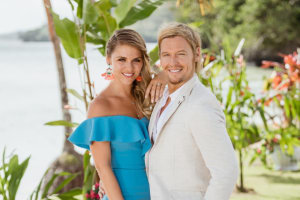 My Kitchen Rules has taken out the top spot in all key demographics overnight, drawing in 1.10 million metro viewers, beating The Voice and the Bachelor in Paradise finale.

Vietnamese mums Kim Tran and Suong Pham took the third spot in the MKR finals, edging out the WA team of Stella Cain and Jazzey Rooney-O’Rourke.

Bachelor in Paradise finale drew in an audience of 774,000, with contestant Sam proposing to Tara in 'paradise'.

Despite being offered a commitment ring from Tara, Sam opted to instead get down on one knee and propose to Tara, which she accepted.

Celebrities and fans alike took to Twitter to give their thoughts on the decision.

Tara NO!!!!!! Not until Sam gives you a written pre-nup that he will sort out his fucking hair!!!!! #bachelorinparadise

How fucking GOOD is it when you’re that into someone and they’re into you back. I LOVE LOVE 💕💕💕 #BachelorInParadise

Other contestants Jarrod and Keira also elected to leave 'paradise' together, while Megan and Jake failed to reach the commitment ceremony.

Ali Oetjen and Grant Kemp, despite committing to their relationship at the ceremony, did not end up together as Ten revealed immediately after the finale on Twitter that Oetjen would be the next Bachelorette.

Over on Nine, The Voice was slightly impacted by both MKR and Bachelor in Paradise, falling below one million viewers with an audience of 905,000.

The Voice and MKR will go head-to-head again tonight, while Ten will air Bondi Rescue in the primetime slot, with Masterchef set to premiere next week 7 May.

Below is a table of the top 20 TV shows, provided by and copyright of audience measuring company OzTam.