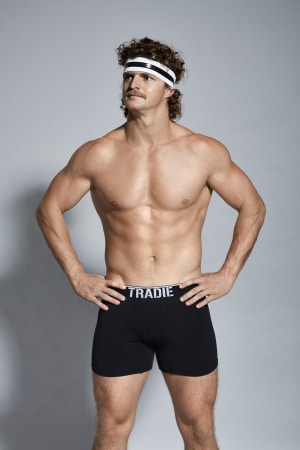 The former Wallaby became ambassador at the Aussie underwear and workwear brand in 2014 and is set to become Ten's new Bachelor.

The GM and owner of Tradie underwear, Ben Goodfellow, says: “That made us known to a lot more Australians and sales spiked for sure. It was significant, well and truly in the double digits."

Goodfellow adds that he was unaware that his long-time ambassador Cummins was set to become the newest Bachelor.

“I didn't know but I had a suspicion something was going on because I was booking our dates to film the next ad and very rapidly we had a two-month block out period,” Goodfellow says.

“I knew something was going on but they didn't disclose it before they should have, so they did the right thing. I was a bit surprised but in a good way.”

Now the smoke has cleared, Goodfellow plans to leverage the decision by Ten to shift the brand's marketing strategy towards the female consumer.

“The women's side of the business is the fastest growing for Tradie, which would have surprised a lot of people three years ago,” he says.

“Once we introduced the women's range it just exploded, so I think that it is just going to allow us to speak to a whole new female viewer who will buy into it.

“We are going to be showcasing our women's range over the next 12 months in a really big way, we've signed on a few new ambassadors as well to come on-board.”

Goodfellow says the brand is not looking to lean too heavily on The Bachelor and Cummins' involvement.

“I think we are on a good track and don't need to adjust to suit The Bachelor. He is going to do his thing on the show, he'll win people over and we will just continue to plug our brand message and our humour,” he says.

The brand places a lot of its budget into TV advertising, working with its creative agency, The Incubator, which is based out of South Melbourne. The agency lists clients on its book such as Optus, GSK and BankVic.

“We've been on TV predominately for the last 12 months, we are a small business so we have put a lot of money into some great ads and we think TV is the best way to go with it,” Goodfellow says.

“At the beginning, we did a lot of outdoor, but once we switched to TV we really went hard at it.”

The brand is now reaping the rewards, as it has been recently been registering double-digit year-on-year sales growth.
The brand's broader strategy is to continue working with brand ambassadors.

Goodfellow says Tradie ambassadors like Cummins and Olympians Kelly Cartwright and Danielle Scott are the types of ambassadors brands should steer towards, rather than “brat” sports personalities.

“Consumers see through brand ambassadors that aren't legit, that are just taking the pay-check. The fact that we have a really legitimate and 100% real brand ambassador, that's what has differentiated us from the rest,” Goodfellow says.

“That's why I think the people are really buying into our personality.”