Tourism Australia sends love to the world amid pandemic 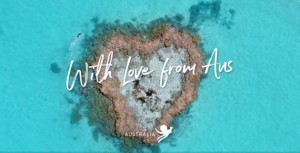 Tourism Australia has released a new campaign amid the coronavirus pandemic.

"With Love From Aus", created by M&C Saatchi, was inspired by the tourism body’s previous Matesong campaign that was paused during the Australian bushfire crisis.

The ad combines webcam shots of people staying connected with images of Australian landscapes and native animals like the quokka, koala and "roos running a muck".

“In these times of uncertainty, the world needs a little positivity and something to look forward to,” Harrison says in a post on LinkedIn.

“Inspired by Matesong, today Tourism Australia is sending a uplifting message to Australians and the world - keep dreaming about the beautiful places, people and experiences waiting for you on the other side of this - with love from Aus …”

This is the first work from Tourism Australia since the release of the PhilAUSophy platform last year since. It was paused during the bushfire crisis.

The platform, created in conjunction with its agencies M&C Saatchi, Digitas and UM, was part of a $38 million investment to be rolled out in 15 key tourism markets over the next three years to attract more visitors to Australia.

One of the first markets to be targeted was the UK which saw Matesong starring Kylie Minogue released before the Queen's annual Christmas speech.

The ads were later reduced as Australia continued to be hit by severe bushfires with the tourism body turning its focus to helping communities recover from the aftermath.

Tourism Australia received a $76 million marketing bushfire recovery package at the time with $20 million to be spent on domestic marketing leading to the launch of Holiday Here This Year encouraging Australians to holiday locally.