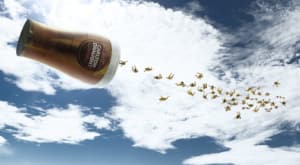 Anheuser-Busch InBev’s takeover of Carlton United Breweries (CUB) has introduced an “incredibly strong growth culture” that is more concerned with rapidly bringing ideas to market rather than defending existing properties and making mistakes.

CUB consumer connections director Chris Maxwell offered last week's AdNews Media + Marketing Summit a rare insight into the business philosophy of the world’s largest brewer and how it has shaken things up since taking over CUB's parent company SAB Miller - in a US$103 billion deal late last year.

Maxwell, who wason the 'Finding success in failure' panel, also shared three 'epic fails' during 20 years at CUB, including the 'Big Ad hangover' and a VB backlash.

The beer goliath, which has seven of the top 10 global brands in its portfolio, has already pledged to strip out nearly $2 billion in cost globally, but Maxwell reveals the company has a strong focus on topline growth.

“Within their culture, they have this saying which is 80:20,” Maxwell said. “Take the thinking up to 80% and then act. The benefit you gain in urgency and action far outweigh the downside of maybe making a mistake.

“That’s been by far the biggest change in the last six to eight months of this new culture that I’m part of.”

Maxwell said this willingness to move quickly on product is a sharp departure from previous ownership that required “the thinking to be 120%”.

“[Under previous management] we’d need to get a 200-page deck to go and get something approved and what you lose there is urgency and the opportunity you could have gained if you’ve been in the market six months ahead of time.

“What’s been extraordinary in the way that my new business approaches risk taking and decision making is this philosophy of ‘get the thinking to the point where you think it’s the right decision and then go’. It’s extraordinarily empowering.”

On the flip side, Maxwell added, “if you [screw] it up, you’re going to have to figure out how to do that better next time. They’re not going to allow you to do that over and over again.

“But they’re of the mindset to take the risk, bank the leaning and if you need to adjust on the fly, they do it so. Don’t get stuck in planning, act, move and get it out of the door.”

Later in the session, Maxwell revealed a couple of ‘fails’ that he has experienced in his 20 years at Carlton United Breweries.

The first came in the wake of arguably the greatest beer ads this country has produced, see below – The Big Ad.

“It was an epic ad, one of the greatest ads ever made by an Australian agency or brand,” Maxwell recalled.

“It left a legacy in the business of ‘we are famous because of our famous advertising, and the brand grew so we needed to do that again and again and again.

“We spent years trying to repeat that, but you’ve got to think that an ad and campaign that is that successful and forward thinking…it’s like catching lightning in a bottle, you can’t just do that on a whim.

The one example that Maxwell recalls is an ad called Skytroop – the most expensive the beer maker has ever produced.

“We literally spent $3 million on production on this ad. It’s the most expensive ad we’ve ever made and is a ridiculous number – we don’t spend that much on media for many of our brands,” Maxwell continued.

We’d have to spend $20 million on media just to make it work but it was a crazy kind of time.

“The fail in that is that your forgetting what you’re doing. You’re forgetting that you are there to sell boxes of beer and not win Cannes Lion awards.

“The big learning we’ve taken on board is that your role as a marketer is to know your consumer and to produce communications that nudge them in a certain direction.”

Maxwell discloses that another marketing fail was a campaign around footy tickets – both the NRL and AFL – where consumers could buy a box of beer to win free tickets.

The campaign sounded simple enough but became unbearably complicated when it went through rounds of internal canvassing.

“Have you guys ever heard of the saying, ‘a camel is a racehorse built by committee’,’ Maxwell asked.

“It went from being this simple thing – ‘buy a box of beer and get a ticket to the footy’ to ‘buy a box of beer, join a club, give us your email address, we’ll give you some points and maybe you’ll win $100,000, make some tips, maybe you get a hat and so on.

“On reflection when you are looking back you think ‘I’m going to do that, I’m making it work for customers, the marketers are happy, the sales guys are happy – but it was a huge failure because it didn’t do anything. Nobody knew what it was.

“It was the most expensive thing we’ve done and we pulled the campaign after one year and will never do it again.

“My learning form that is if you get a really good nugget of an idea, be really, really protective of that and don’t layer over too much other shit.”

Another less spoken about failure at CUB was reducing the alcohol content on it’s best selling beer VB.

Maxwell told the Media + Marketing Summit that over a long period time the brewer had reduced the alcohol content of VB, despite the brand’s tagline that it was “Australia’s big cold beer”.

“For commercial reasons we decided to take the alcohol content down from 4.9% to 4.6% and over that period we shed a lot of loyal consumers,” Maxwell said.

The savings CUB sought to make was lower tax, which is based on alcohol strength of products, but this ended up costing more in lost customer revenue.

A previous CEO who just landed at the beer company immediately changed it back despite the extra cost.

“It was a very expensive decision to take it back. There was a tax implication to why the alcohol was taken down and putting it back up meant we were going to pay a lot of money in tax.

“But we did it to give back a product to consumers that they loved and a letter ran in the paper with his signature on it saying ‘we’re sorry, we screwed it up’.”