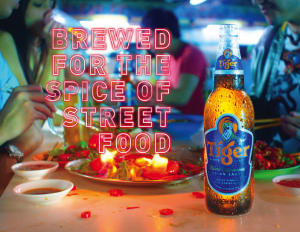 Tiger Beer is 85 years old but the brand is far from ageing. Synonymous with South-East Asian culture, Tiger has been drunk alongside streetfood curries, noodles, sago pudding and everything in between for decades.

But, after nearly a century of consumption, Marcel Sydney took on the challenge of reinvigorating the popular drop and broadening its horizons.

Over the last 12 months Marcel has created a raft of projects for the brand that go beyond advertising, and followed up with a global campaign in May.

Beer with Bite launched in May. Previous campaigns have followed a similar format to traditional beer ads; a short, but punchy narrative, a few plot twists, ending with a tight shot of a bottle.

While 'Beer with Bite' ends in a tight shot, it shirks narrative for action, swaps plot twists for pulse, and takes you on a visually stunning journey through the buzzing streets of Singapore’s capital.

What the brand says:

It was important to ensure we captured and visualised the brand’s character in the films and established Tiger as the ‘Beer with Bite’. Tiger’s ‘bite’ is a truth not only of our flavour, but of our attitude as a brand.

Much of Tiger’s power as a brand comes from its visceral street origins, so we started there and stayed there. We wanted to create films that didn’t just tell you about Tiger; they pulled you out of your seat and slammed you down in Asia.