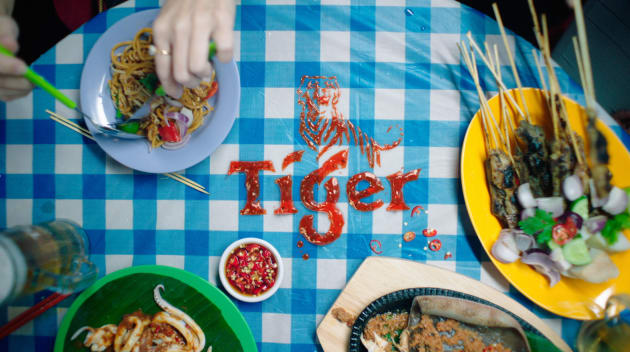 In a campaign that pays tribute to Tiger Beer’s Asian heritage, Marcel Sydney takes viewers to the streets of Singapore.

Introducing a new tagline, “Beer with Bite”, the campaign launches a series of 30 and 15-second films that aim to tell the story of the bold attitude and flavour behind the beer.

Showing off Tiger Beer’s solar powered brewery, the vibrancy of Singapore and its street food, the four part series create a story line for the brand.

“It was important to ensure that we capture and visualise the brand’s character in the films and establish Tiger as the ‘Beer with Bite’. Tiger’s ‘bite’ is a truth not only of our flavour but of our attitude as a brand,” explains Mie-Leng Wong, global brand director of Tiger Beer at Heineken.

“Tiger embodies the vibrant energy, attitude and bold creativity of the streets of Asia. That unconventional spirit that has been at the heart of our brewing and created a beer that is both refreshing and full-bodied at the same time.”

Scott Huebscher, ECD of Marcel, adds “Much of Tiger’s power as a brand comes from its visceral street origins, so we started there and stayed there. We wanted to create films that didn’t just tell you about Tiger, they pulled you out your seat and slammed you down in Asia”.

To capture the feeling of the streets of Asia first hand, Matt Devine of Revolver shot the spots on location in Singapore.

The campaign, created by Eardrum, hijacks other ads in the break to explain audio’s ease of production and large in-home audiences.