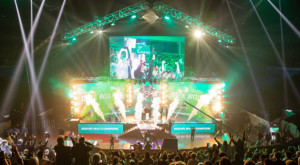 A new e-sports competition in Australia has pulled in more than 12,000 fans and 12 million content views.

The Overwatch Contenders Australian Semi and Grand Finals shared the spotlight on the Rod Laver Arena main stage on Saturday 1 September, while the League of Legends’ Oceanic Pro League Grand Final was the main event on Sunday 2 September.

The event featured branded activations including the 'JB Hi-Fi Game On Zone', giving gamers early access to some of this year's upcoming titles.

“There is no reason to doubt that Australia can follow that trend and make the Melbourne Esports Open a huge live event and a significant global esports competition."

JB Hi-Fi has signed a three-year deal to remain the presenting partner of the event and Visit Victoria's involvement continues to fuel speculation that Melbourne is looking to cement itself as the home of e-sports.
In Australia, e-sports continues to grow its fan base, as well as brand partnerships.

Most recently, Amazon-owned streaming platform Twitch revealed it was upping the level of expectations it has for the Australian market, as it looks to capture more brands for its swelling audience.

Speaking to AdNews, Twitch's global director client strategy Mike Lucero says the biggest challenge in on-boarding brands in Australia is having them understand who the Twitch audience is.

In June, Gfinity Esports Australia entered into an exclusive online broadcast deal with Twitch, while Nova Entertainment inked its own strategic partnership with ESL, the world’s largest e-sports company.

As part of the deal, Nova will be responsible for all of ESL's promotional assets, as well as the marketing strategy for its Intel Extreme Masters Sydney and the ESL AU and NZ Championships.

However, not everyone is impressed. Southern Cross Austereo (SCA) CEO Grant Blackley recently labelled the e-sports industry in Australia 'the wild west' in terms of securing rights and profitable deals.

Blackley previously told AdNews that while the company had looked into securing deals over the past 12 months, unlike SCA's competitors, it has not yet found a "path into profitability".