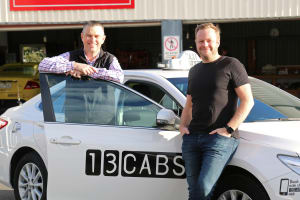 The creative shop officially opened up shop last month and will no doubt have its hands full trying to shake-up cabbie perceptions and compete with major taxi disruptor Uber.

The service, which was founded in 1946 and has nearly 7500 cars on the road, is thought to be one of Australia's largest cab companies, "responsible for almost half of the taxis on roads in Brisbane, Sydney and Melbourne".

“I’m pleased to welcome the Thinkerbell team on board, we’ve got some fantastic stuff in the pipeline and we can’t wait to help build this great brand together," 13CABS chief operating officer Stuart Overell says.

The taxi industry has been massively disrupted by the emergence of Uber. Taxi companies are now under immense pressure to modernise and overhaul their booking systems, which have been criticised in the past for their less-than-perfect user interfaces.

“13CABS is a brilliant business. We’ve been brought in to help build the entire brand, from driver recruitment right through to consumer facing comms," Thinkerbell creative founder Jim Ingram says.

"And as we understand more about the role 13CABS actually plays in the lives of regular Australians, the more we want people to realise that cabs are a part of the fabric of our community,"

13CABS head of marketing Liz Attia says she has worked with founders Ingram, Ben Couzens and Adam Ferrier in the past and loves Thinkerbell's "Measured Magic" philosophy.

Thinkerbell is gaining momentum down in Melbourne and is also in the pitch for Holden's new SUV model.

The agency began trading in late May from offices on Melbourne’s Chapel Street and already has some clients on the board, which they are yet to reveal.