The Lion's Share launches with United Nations in New York 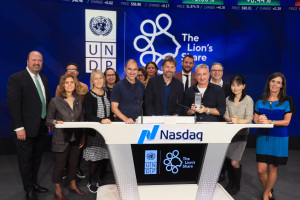 The Lion’s Share has launched in New York with the support of the United Nations Development Programme (UNDP) and founding partners Mars.

It made its debut on stage at Cannes Lions earlier this year and quickly garnered the support of Sir David Attenborough, UNDP Administrator Achim Steiner and Game of Thrones actor Nikolaj Coster-Waldau.

As part of the New York launch this week, it was revealed the Economist Group has joined The Lion's Share.

While corporate partners contribute 0.5% of their media spend when they feature an animal in an advertisement, The Economist Group’s role will be unique as it contributes 0.5% of the amount it receives from advertisers featuring animals in their commercials in the group’s publications.

The fund aims to raise $100 million over the next three years, which will be invested in initiatives and programmes that benefit animal welfare, conservation and their environments worldwide.

UNDP will host the fund’s Secretariat, which will support the overall operations of the fund. As well as UNDP and production company Finch, the founding partners are Mars Incorporated, advertising heavyweight Clemenger BBDO and leading global measurement and data analytics company Nielsen.

“Conservatism and consumerism rarely mix. The Lion’s Share is abundant with hope acting as the nexus between the two. It feels like compassion and imagination are sorely missing in the world, and The Lion’s Share is a great example of both working together,” Finch founder Rob Galluzzo says.

“Each year, we lose 10,000 species to extinction – a staggering 1,000 times the natural rate. The Lion’s Share idea is as fascinating as the far-reaching impact it will have. The revenue generated from this ambitious and innovative partnership will make a real and lasting effect on the future of our planet and the animals we share it with,” UNDP Administrator Achim Steiner says.

As The Lion’s Share becomes operational, the fund will quickly invest in the next three months in a number of high impact conservation initiatives around the world:

Want to become part of The Lion’s Share. Go here.