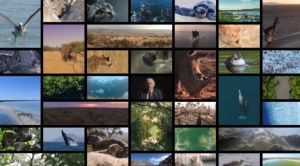 From Cadbury’s famous Gorilla advert to Budweiser’s Clydesdale horses Super Bowl spots, animals have fronted some of the world’s most famous advertising campaigns. But despite animals featuring in 20% of all advertisements we see, they don't receive the support they deserve. Until now.

Introducing The Lion’s Share; an initiative that sees brands commit 0.5% of their media spend for any ad featuring an animal into funding that goes towards the conservation of wildlife and animal welfare.

Announced today at Cannes Lions, The Lion’s Share was co-founded by Finch boss Rob Galluzzo and Christopher Nelius. It's an original idea from Nelius, developed and instigated by Galluzzo and Michael Hililard at Sydney production company Finch.

It launches with Mars as its foundation brand and Nielsen as a partner and has hopes to garner the support of other conglomerates around the world in coming weeks. It's big goal is to raise $100 million a year for the cause within three years.

The Lion's Share is fully supported by the UN Development Programme (UNDP) as official an co-founder with the organisation managing the fund and conservation impact.

Speaking to AdNews at Cannes Lions, Galluzzo says The Lion’s Share is a “fundamental change of behaviour for the corporate world”.

“Many animals are facing extinction at the exact same time as brands are profiting from animals in their ads. So why wouldn’t brands want to put a percentage of their media buy forward to protect the wellbeing of these animals and their habitat?”

With a friendship spanning 15 years and long-standing careers in the ad industry, when Galluzzo presented the idea to Clemenger CEO Nick Garrett, the pair recognised it was an initiative big enough to make a difference to the conservation of endangered species.

“We knew we had something that could change the world, rather than just change a brand,” he said.

“We partnered with D.A.M studio. They developed The Lion's Share brand strategy and a powerful identity to bring it to life. We’re excited to see this grow, as advertisers see the power in the brand."

The pair then presented the idea to Mars global CMO Andrew Clarke, knowing it was the right fit for the pet care brand, which owns labels such as Pedigree and Whiskas.

“It’s not like selling a retail campaign for a brand. The first ‘no’ would have closed this down immediately and we needed 10 ‘yeses’ in a row,” Garrett says, adding that so far, there hasn’t been any roadblocks.

“I saw the idea, I loved it. We got it to the client and they bought it but the risk financially was always back on Galluzzo and Finch.”

It’s a big idea to come from a humble production company in Australia, and one that will see Finch’s global reputation reach new heights as Galluzzo spends the next several months recruiting brands and political support for The Lion’s Share.

He is calling for Australian brands to now back the initiative.

“We have a massive job at hand over the next few months, building a brand that can last forever. The stronger we can build The Lion’s Share, the bigger the brands we can get associated with it and then the more we can get consumers realising the importance of conservation," Galluzzo said.

Garrett joked that only Galluzzo would have the guts to knock on the United Nations door and actually have the organisation come on board.

With Clemenger Melbourne taking out Agency of the Year at Cannes Lions last year, all eyes were on its next move.

Garrett says The Lion’s Share sticks to its principle of ‘No Pollution’ and shows great work can also have a wider impact on society.

“The thing that separates Clemenger Melbourne from any other agency in Australia by a long way, and you can debate whether you like the idea or not, but most of our best work pushes Australia forward societally in quite a dramatic way,” Garrett says.

“The Lion’s Share should remind the good people in our industry who give a fuck – which is a lot of them who work their arse off everyday – that you can do amazing things.”

While the campaign will earn Clemenger and Finch recognition globally, the idea is to have The Lion's Share take on a life of its own.

“This is a lesson for Australia or any country. Our bar isn’t to the best in Australia. Our bar is to be the best in the world. When you set yourself that a target the ideas are framed in a way that can get you there," Garrett said.

Finch’s internal innovation, venture and post-production business Nakatomi is currently working with the CSIRO on how to use blockchain to distribute the funds it collects.

Want to become part of The Lion’s Share. Go here.