People are watching less traditional TV in favour of video on their smartphones, a new report from the Interactive Advertising Bureau has found.

The peak body has published the Australian results of a worldwide study of consumers and their mobile video consumption habits. Among the key stats are that 33% of people are watching more video on their smartphones than a year ago.

The report also found that Australians are also more likely to watch long-form content on their mobiles, with 30% of respondents claiming that they did so on a daily basis.

A total of 22% of respondents said they had watched a TV show on their smartphones in the past three months, and 21% had watched a movie.

The increase in video consumption appears to have been at least partially at the expense of traditional TV viewing, with 14% saying they now watched less TV because they were consuming content on their smartphones.

“The IAB report illuminates a paradigm shift that's taken place in video for mobile, and one which is undeniably disrupting traditional broadcasting probably far quicker than most thought,” he told AdNews.

“Subscription video on demand [SVOD] is trumping linear TV generally, and mobile is dramatically extending the occasions when video content can be accessed.”

“I think if the content is interesting enough, people are going to want to watch it when it suits them no matter what it is,” Allison told AdNews.

“I think that premium long-form content offering hasn't been all that available for the mobile platform before … yes short-form content is still in vogue but increasingly I'm seeing that sort of content [long-form] consumed.

“You only need look around when you're on the bus or train to realise that people are watching movies and TV shows on their phones.”

Commuting to and from work was a particularly good time to watch mobile video, according to 19% of respondents.

Also among the findings is information on when and where we prefer to watch mobile video, with most of the content viewed between 5pm to 11pm, and 45% saying they watch video between 8-11pm.

“Although there's bias to shorter form content, longer form is growing and it's obvious that catch-up type services will be picking up audiences.”

Mnet CEO Travis Johnson, who will be promoted to worldwide head of mobile for IPG Mediabrands told AdNews he was a touch more skeptical about the results, saying the sample size of the IAB study was skewed toward people consuming mobile content anyhow, and too small. 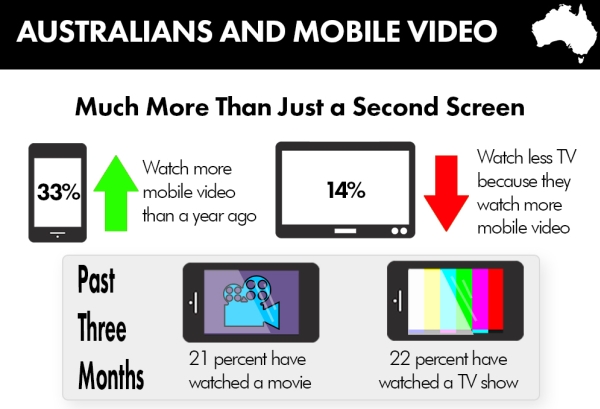 Click on the above image for a full breakdown

The IAB report also noted that advertising is seen as prominent, but not hindering the experience.

IAB chief executive Alice Manners said this reflected an increasing aptitude on the part of advertisers for serving relevant inventory to consumers.

“I think the study also shows that, for the most part, video advertising has learnt the lessons of its predecessors in regards to taste and placement,” said Manners. “Four out of five Australians prefer free video with ads on their phones versus paying for no ads, which is good news for the industry.”

Allison added that the increasing effectiveness of campaigns was at least partially a by-product of supply constraint in the video market.

“I think we are getting better at placing ads, because we're getting smarter with things like targeting and we're starting to see that reflected,” Allison said.

“The market for video remains really tight and CPMs are reflecting that, so we're definitely making sure that the buy is as effective as possible for clients.”

It was a point backed up by Christie.

“Under-supply of high quality content means that brands need to extend a critical eye over where their ads are appearing,” he said.

Johnson said it was simply a function of more trading tools being available rather than anything to do with higher CPMs.

“I think that's a function of the tools we have at our disposal now in terms of targeting, sequencing and that sort of thing. But it's not like humans are sitting there doing the buy individually, a lot of the process is being automated and the computers are getting more tools to carry out the buys – so they're getting better.”

While the revelation that people are watching more mobile video at the expense of TV may not be music to the ears of linear TV network bulls, those who are diversifying into providing mobile video content through catch-up TV and other forms may be heartened by the numbers.

Seven West's chief digital officer, Clive Dickens, has long been preaching on mobile not being the second screen, but the screen.

He previously told AdNews that Seven West is increasingly thinking about a mobile-first strategy.

It launched a dedicated app for the push yesterday, unveiling an app focused on its coverage of Royal Ascot.

Apps focused on tennis, swimming, and golf will also be rolled out over the 40 days where Seven is covering Wimbledon, the Davis Cup, the FINA swimming world championships, and major golf tournaments.